Looking Back And Moving Forward: What Does The Future Hold For Brock Lesnar? 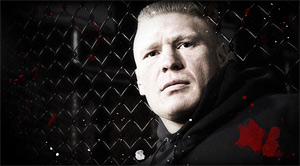 What do I see in the future of Brock Lesnar?

Happy New Year fans and friends! I took a bit of a long weekend to enjoy the coming year with my family, but now I’m back and ready to resume my normal posting duties. As such, I feel the time is right to talk about something that’s been lighting up message boards across the internet: the retirement of Brock Lesnar. Was it the right thing to do? Will Lesnar stay retired? Does this automatically mean that Brock Lesnar will return to the WWE? Here are all my thoughts in full.

People are looking at this a lot of different ways and raising a lot of different points now that we’re talking about an entire career rather than just the next upcoming fight, so this post will be more of a “highlight reel” giving my quick-fire reactions to most of the points I see being discussed.

First and foremost, the UFC absolutely made the right call in making Lesnar a big star as quickly as they could. With someone who has as much name recognition as Brock Lesnar, you don’t start him out at the bottom. It makes sense when nothing else is considered except for his status as a newcomer, but the UFC is a business and they rightfully saw lots and lots of dollar signs when they signed Brock Lesnar.

Let’s not beat around the bush: the UFC always intended to make as much money off of Brock Lesnar as quickly as possible before his inexperience caught up to him. It just so happened that Lesnar was such a freak athlete that it took a lot longer for that experience gap to finally bite him in the behind. We can complain that it wasn’t fair he got vaulted to the top based solely on name recognition, we can belittle his run by saying he beat inferior competition, but from the moment he first stepped foot into an Octagon the UFC utilized Brock Lesnar to draw millions of Pay-Per-View buys and sell tens of thousands of tickets. If that’s not the best way to capitalize on a fighter already having a significant following, I just don’t know what is.

Secondly, I don’t agree with the Lesnar cynics sweeping his battle with diverticulitis under the rug and exclusively focusing on his shortcomings as a fighter. That’s something I’ve never understood about the Lesnar haters- how cynical and uncaring they can be. This wasn’t a little cough and cold… this was a serious, life-threatening battle that permanently changed Lesnar as a human being. His first battle with this disease nearly killed him. His second battle ended when he had surgery that removed about a foot of his colon. No human on this planet could be the same person after going through that, especially not a top-tier athlete.

However, I will admit that Lesnar was always a one-trick pony. We can blame it on a lack of confidence, a lack of wanting to improve, or maybe even an inability to improve and adapt. But the proof is in his last three fights: Lesnar has practically no stand-up, he doesn’t react well at all when he’s put in difficult situations, and he can’t take a good hard shot without flinching and losing his cool. Although he had a great top game when he could get the takedown, without the takedown Brock Lesnar wasn’t much of a fighter at all.

The last point I’d like to discuss is the “Brock Lesnar to WWE” rumor. UFC President Dana White himself recently said if Brock Lesnar really does retire, he’ll retire under contract. That’s Dana’s veiled way of saying “so long as I have a say in the matter, Lesnar isn’t going to the WWE anytime soon”. If you want to see how staunchly Dana White will defend his rights, look at the situation with Randy Couture from a few years back when Couture tried to leave the UFC as champion and with fights remaining on his contract. Dana White will pursue every legal avenue he can to keep Brock Lesnar out of the WWE for as long as he possibly can, trust me.

But the second Lesnar’s current UFC contract is up? To be honest, I’m still not buying that Brock Lesnar goes back to the WWE. The reason he left it in the first place was because of its travel schedule, and that simply hasn’t changed. Personally, I think Brock Lesnar has made more than enough money to really retire from all facets of competition and spend his time with his family and hunting in the woods nearby his giant ranch.

And that’s that, fans and friends. Think of this as “Part 1” on my take on Brock Lesnar, the next part will feature how I’ll personally be remembering Brock Lesnar.