UFC 141: A Day In The Life Of Alistair Overeem [VIDEO] 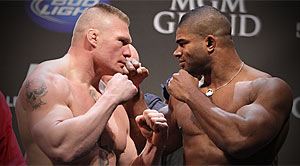 Former STRIKEFORCE heavyweight champion, Alistair Overeem, gives you a behind-the-scenes look into his life as he prepares to make his Octagon debut tonight at UFC 141. The Facebook prelims have already begun, and in just a few more hours, over 500-pounds of monster madness will collide in the main event. The contest will also determine the number one contender to challenge current UFC heavyweight champion, Junior dos Santos in the new year.

Who do you favor for the win tonight in the fight between Brock Lesnar vs. Alistair Overeem? The wreslter, or the kickboxer? Make your pick in the comment section below.