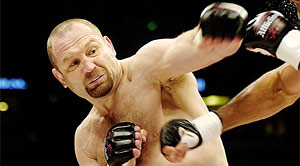 Will "The Janitor" continue his good run in the UFC?

Hello hello fans and friends and welcome back to my “UFC 141 Complete Collection”. As we edge closer and closer to this Saturday and the colossal mega-match between former Strikeforce Heavyweight Champion Alistair Overeem and former UFC Heavyweight Champion Brock Lesnar, I’m getting closer and closer to talking about it. Right now, though, it’s time for part 8 of the collection, a Light Heavyweight contest between resurgent long-time veteran Vladimir Matyushenko and top prospect Alexander Gustafsson.

In his fourteen years spent fighting in cages and rings all around the world, “The Janitor” Vladimir Matyushenko has had a total of three runs in the famed Octagon. In 2001 and with a highly respectable record of 10-1, Matyushenko fought Tito Ortiz for the UFC Light Heavyweight Championship, but would lose the bout via Unanimous Decision.

Matyushenko would then compile a record of 12-2 over the next six years, losing only to top fighters Andrei Arlovski and Antonio Rogerio Nogueira, both of which were KO losses. In that time period, Matyushenko captured the Light Heavyweight Championship of the short-lived International Fight League promotion. Matyushenko is currently on a two-fight win-streak with both wins by stoppage, and has won four out of the five fights that have encompassed his latest UFC run. The only man to beat Matyushenko in his latest trek inside the Octagon was Jon Jones, who went on to become the UFC Light Heavyweight Champion.

His opponent, Alexander Gustafsson, is in the early stages of his career but is already exhibiting flashes of greatness. Gustafsson is currently 12-1 with eleven stoppage victories, a majority of those wins (seven, in fact) coming by way of first-round stoppage. Following a loss to Phil Davis in 2010, Gustafsson slowly but surely built himself back up in the rankings with a convincing series of victories over Cyrille Diabate and James Te-Huna. Most recently, Gustafsson scored the biggest win of his career when he beat highly-respect Light Heavyweight journeyman Matt Hamill in what would end up being the final fight of Matt Hamill’s fighting career.

I’d be lying if I said that my own personal feelings for Matt Hamill weren’t clouding my judgment for this fight. So let me be plain, blunt, and plainly blunt: I want Vladimir Matyushenko to knock Alexander Gustafsson out because Gustafsson retired Matt Hamill, one of my “dark horse favorites”.

Does the rational side of my brain known that Hamill had one foot out of the door already and that even a win over Gustafsson probably would’ve only slightly prolonged the inevitable? Sure. But sometimes that part of my brain flies right out the window, especially when it comes to picking fights that I have a strong interest in. I won’t deny that in some of my predictions, I pick against fighters because I want them to lose, not because I think they will lose, or because I have a strong affiliation with a fighter that’s an underdog but who I personally like.

That’s favoritism, of course, but hey… this is my site and it’s my rules. But don’t forget that “The Janitor” has been on a pretty good tear lately. This is one of those moments where the fighter I want to win because of some emotional attachment actually has a really good chance of winning.

So while a majority of my argument seems to be that I’m picking against Alexander Gustafsson more than I’m picking for Vladimir Matyushenko, I think Matyushenko has more than enough skill and experience to fulfill my wish and give me a good KO victory over the man that retired one of my favorite fighters.