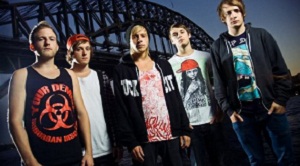 Century Media’s Architects (UK) have released the official video for the track “Delete.Rewind” from their album The Here and Now.

I gave the album high marks for taking metalcore to new places, despite finding the genre about as enjoyable as a prostate exam. However, you have to give a band credit when they try to push the envelope.

At any rate, the song “Delete.Rewind” is a million times better than the video, which consists of reels of generic live footage, which equals boring. However, what these performance videos usually try to do is to capture the feel of the band live, which this video does.