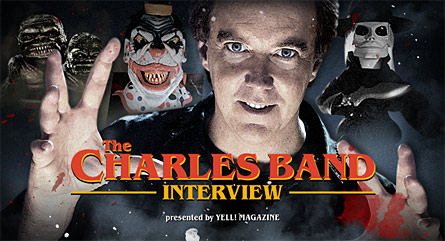 From Puppet Master to Crash And Burn to Seed People to the beloved The Pit And The Pendulum, many horror fans cut their teeth on the films of Full Moon Pictures. And rightfully so.

Although there have been forays into comics, toys, and music, the main attraction has always been the Full Moon movies. However, Full Moon has recently branched out onto the Interwebs with FullMoonHorror.com, which features free movie streaming, interviews, articles, and more.

It’s our great pleasure to present Yell! Magazine’s exclusive interview with Charles Band. Watch out for dollmen, demonic toys, towering robots and beach babes from beyond! It’s time to get this interview started!

1. What was the genesis and the ultimate goal for the FullMoonHorror.com site? 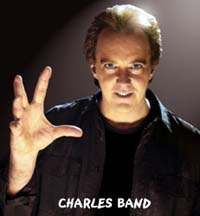 The Internet and the new media revolution has shown that online is where the audience wants to get their entertainment. As a result, we’re building FullMoonHorror.com as an online “hangout” where users from around the globe can get the Full Moon experience firsthand. The site has exciting things happening all the time: a free, full-length feature movie each week; interviews with celebrities; live video feeds; behind-the-scenes bits; never-before-seen film clips; industry news; chat rooms; raffles; contests showcasing fan videos; and much more.

2. Have you seen a spike of interest in Full Moon since the launch?

The reaction from fans has been phenomenal! Tons of great feedback. Plus our Facebook pages and Twitter are more active than ever. We’ve expanded to the point where the website itself is fun, more than just the trailer for our next film and a place to purchase the DVDs and replicas. There’s a whole world of entertainment at FullMoonHorror.com.

3. The majority of your films feature small creatures; can you explain why? Do you have a deep-rooted fear of small things?

You know, strangely enough I enjoyed those kinds of movies as a kid. I liked films that showed people in different sizes threatened by huge cats or something. I think that Karen Black segment in Trilogy of Terror is one of the most terrifying 30 minutes of film. But, this is something I’ve enjoyed doing. I think at some point, even though my body of work obviously reflects it now, but God help us, 10 years down I might have a 100 movies with 12″-16″ main characters. But I’m not really afraid of that stuff. 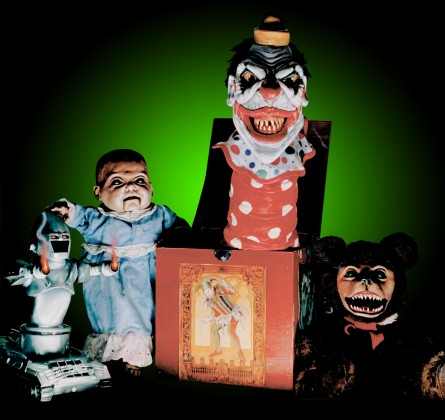 I’ve never made a slasher movie — there’s nothing entertaining to me about a guy in a ski mask cutting people up. I mean, that’s every day on the news. Or people are getting beheaded. That’s just not fun. Creatures, monsters, critters, puppets doing crazy stuff: I think a lot of us know that’s sort of pretend, and if you’re clever enough, you can creep people out a bit or make them laugh with some weird double entendre. I don’t know quite how to describe it, other than it’s another weird sub-brand of the horror genre. 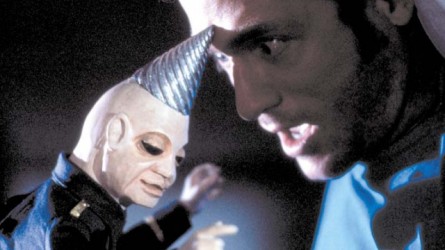 There’s something sinister about something small that could be hiding anywhere. Also, some of this is budget-driven. I feel that less is always more. To attempt bigger things, bigger sci-fi/horror themes on these very low budgets is just impossible without making yourself look stupid. To some degree, I think I can do a good job with some of the recent movies and scenes that do involve these diminutive little characters and killer dolls and puppets. But some of the projects coming up are completely out of that realm, so it won’t be every one but there’s no doubt that part of the absolute plan for Wizard is to create movies that, at their core, do have puppets, monsters, creatures, characters that are — if the word exists — “toyetic.” That can be turned into action figures because I love that through-line and I think the fans dig it too. And, of course, the actual puppets and dolls — anything that’s anywhere from 8″ to 16″ in the movie — really lend themselves well to action figures and models and replicas. 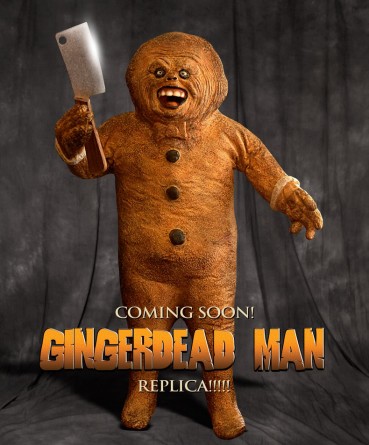 4. With the Internet becoming our main source and central point of entertainment, what do you see for the future of small-market studios? Are you intending to be a part of this future with new productions?

For us, the main difference is the distribution. Instead of VHS tapes (or even BETA!), it became DVD, then Blu-ray, now it’s NetFlix and Red Box, it’s Hulu and iTunes. You know, I just want to make movies that people enjoy, and the plan is to make these movies, and if it’s successful, use the money from that to make the next film. Hopefully with the road show and FullMoonHorror.com, we’ll get a lot of exposure and it can help fund some bigger, more ambitious things, like another Subspecies and Puppet Master, which will cost a bit more. And that can hopefully lead to other things.

5. The direct-to-video market has changed considerably since the early ‘90s. If Full Moon Pictures started in the mid-2000s instead of the early ‘90s, do you think it would have found as much success?

Let’s not forget the ’80s! The past few decades were different in every way. Full Moon adapted to the times. Empire of course was in the ’80s; we did theatrical distribution and so on. Originally the distribution arm was Paramount and we had to follow the beat of their drum. By the time we pulled away, the video business had changed and a lot of things were done to try to keep making some money and cover overheads. The video business is changing again.