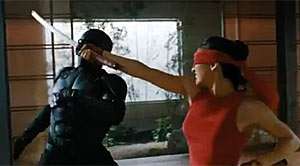 After a disappointing, but profitable, first entry, G.I. Joe returns with a more mature cast and an equally mature look. Gone is Stephen Summers’ popcorn sensibilities and in are Dwayne “The Rock” Johnson and Bruce Willis. Gone are the ever annoying Marlon Wayans and Rachel Nichol’s vacuous form of acting, in are Adrianna Palicki as Lady Jaye and erstwhile Punisher Ray Stevenson as the villainous Firefly. Judging from the newly released trailer for G.I. Joe 2: Retaliation, they’re going for a much darker tone this time around. While the first movie drew inspiration from the cartoon, and thus felt like one, the sequel appears to draw more from Larry Hama’s celebrated Marvel comic book. While I could not be bothered to check out the first G.I. Joe in theaters, this trailer pretty much guarantees that my ass will be in a seat on opening day.