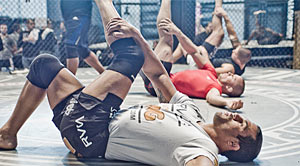 Without a doubt, Georges St-Pierre has a tough fight coming up against Nick Diaz, which headlines the UFC 143 fight card in the welterweight championship bout on Feb. 4, 2012. GSP is known to be a “cardio machine,” and having personally seen him train at the Tri Star Gym in Montreal a few times, I can say his intensity is no lie. The upcoming fight isn’t providing GSP with many regular days at the office, as shown in a new set of pictures of the champ training alongside middleweight contender Vitor Belfort and trainer Alvaro Romano, founder of the Ginastica Natural method. Whether or not they have collaborated in the past, it looks to be a beneficial session for both fighters as they prep for their next fight.

Check out the entire picture gallery above, which also features other MMA fighters like Dan Hardy, Brendan Schaub, and Francis Carmont just to name a few.

More about this training

Alvaro Romano (Ginastica Natural) introduced his unique training to GSP and his champion crew. It was a day of full-throttle, intense training. The introduction was his core principles, followed by BJJ three-time World Champion Gilbert Durinho showing some inside information.