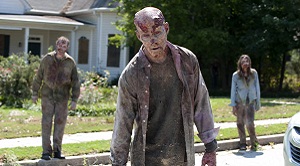 I love it when a TV episode’s got a theme. It makes the show so much easier to review. Case in point: this latest instalment of The Walking Dead, “Secrets,” may seem like a random scenes leading up to next week’s mid-season finale, but the threads all have a common goal: to demonstrate how Rick’s recent spiritual crisis has allowed the other survivors to blossom as worthy leaders themselves. On a human level, this ought to come as good news, but, with Hershel’s controversial approach to zombie survival now revealed, the group might end up instead with too many cooks in the kitchen.

Take, for example, the manner in which Dale insinuates himself into every dilemma, getting his way through manipulation. The old man started his altruistic con games in “What Lies Ahead,” feigning engine trouble to prolong the search for Sophia. Now he’s counselling Lori on her unwanted pregnancy and having secret negotiations with Hershel. At the moment, Dale’s loyalties lie firmly with Rick, but I can’t help wondering what would happen if that were to change. After all, his proposition to Shane proves nothing short of cruel: “I don’t want you dating people I like, so kindly go die alone in the zombie apocalypse!”

If The Walking Dead were a reality show, we all know Shane would be the first to get voted off the island. I feel for the tormented sheriff’s deputy, who led the tribe with moderate success before Rick came along and robbed him of his support system. Sure, his methods of late have raised a number of ethical questions. However, the man has consistently gone above and beyond to protect those who fear and hate him, and how many of us can claim the same? Oh, sit down, Professor X!

At least Shane’s found an acolyte in Bull’s Eye Andrea, who now shares his appreciation for guns, especially his own if you know what I mean. Despite digging their pairing, I confess to getting a bit put off by the way the two outcasts hook up. Mind you, I’m not judging. In a land overrun by flesh-hungry ghouls or, as Hershel would surely call them, life-impaired Americans, palming a guy’s sausage might indeed pass for romance. At any rate, it beats sending Glenn to the local Hallmark store.

Maggie makes a good point about the other survivors using her Korean paramour as “walker bait” (note that she doesn’t say “Mom” or “Sean” anymore). The farmer’s daughter is also right about his untapped potential, though I find it unfortunate the writers didn’t foreshadow this turn earlier in the season. Viewers who don’t remember Glenn’s prowess in “Guts” last year may find it difficult to perceive the guileless stutterer as a threat to anyone’s authority, let alone Rick’s.

Regardless, I like the notion that, as an Asian delivery boy, Glenn has been conditioned by years of institutional discrimination to believe he should put himself last to fit in. Now that the social constructs reinforcing those race and class paradigms have crumbled, the man can finally live up to his potential, saving lives and landing the girl who doesn’t go around grabbing other people’s junk. It’s worth noting as well his approach with Lori proves both more tactful and more effective than Dale’s. Of course, it doesn’t work, but that’s Mrs. Grimes for you.

In fairness, Carl’s morbid cynicism in the cold open would rattle any mother. Besides, the idea is to show Lori taking the reins away from her husband like everyone else. In fact, save for Carol, who has no lines, only two characters fail to show leadership this week: Daryl, who was already compared to the top dogs last episode, and T-Dog because no one in his or her right mind would follow somebody named T-Dog. Even Rick gets his Rickness back, revealing that he’d already forgiven his wife for sleeping with Shane. Just in time too. With everyone eying the chef’s hat, I’m betting the kitchen is about to heat up.

All images credited to AMC.