Monsters Of MMA: Urijah Faber’s “No Shirt Nation” Deal With Ariel Helwani – Or: How It Could Go Down 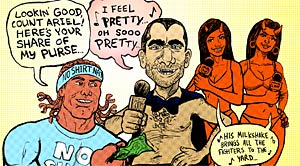 For those of you who aren’t currently following Ariel Helwani on The MMA Hour podcast via MMA Fighting, you might find our first collaboration with comic book artist Bryan G. Brown, the man behind the No.1 MMA comic book in the world, Monsters of MMA, slightly less humorous than we do. And we gotta ask, what’s wrong with you, man? Not being into this is like not being into chiselled, shirtless men… er, women… er, gerbils… or whatever the hell you’re into.

But fear not, one of our goals in this Monsters of MMA venture is to bring you some insight into the things happening around the MMA community. We’re aiming to cover more than just the BIG PICTURE news, if you know what I mean. That’s cookie-cutter kid stuff and we’re more grown up than that, that’s why we like pictures with our news. There are tons of other MMA news sites out there that give you plain-Jane journalism (you know that a cereal box offers more climax’ and cliff-hangers), but our focus here at Yell! Magazine is to report the MMA news in the most interesting and entertaining way, and that’s the monster way. With that, we welcome you to the Monster of MMA.

Here’s our first instalment (don’t worry, if you can’t read because you’re a victim of No Child Left Behind, just enjoy the picture):

Team Alpha Male leader, Urijah “The California Kid” Faber, who I always pictured to roll in on skates or a skateboard to the Octagon, started a hashtag trend on Twitter called “No Shirt Nation” (picture the shirtless werewolves in Twilight… Jesus Christ!) a while back. Montreal-born MMA journalist, Ariel Helwani, who has interviewed Faber numerous times over his career, questioned and taunted him on the topic. Helwani stated that Faber and his team are chokers, and aren’t fully behind the trend. Faber responded that it’s a mentality thing, and that Ariel needed to be apart of it. To be the first “No Shirt Nation” role model for hot female journalist like Megan Olivi (Heavy) and Molly Qerim (ESPN, VERSUS).

As sure as Greece’s struggling economy or the fact that the recent vomit-inducing American Music Awards was an extended and collaborative commercial (we would have tapped out, but it was like a train wreck), the teasing backfired on Ariel as Faber returned the taunt in a shirtless interview. C’mon now Ariel, don’t let this bantamweight bully turn you into a lily-livered coward. Since this dispute is still going on between the two, we need to see the score settled once and for all. Don’t you think?

The Monsters of MMA comic above is our first salute to Faber, and also Ariel for never letting that humour go, and we still get a kick out of it every time we hear it. Although we don’t really think it would go down the way Faber is hoping, it’s in his head. Bryan (Monsters of MMA), on the other hand, has it down more realistically.

Be sure to check back in the following weeks, as we roll out more Monsters of MMA.