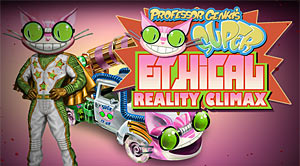 Tim and Eric will take the depravity of Professor Genki’s Super Ethical Reality Climax to new heights, and lows, with their own, full-length live-action episode, featuring such crowd-pleasing contests as Tall Cat Parade and Eat Yourself. They will also, for the first time ever, detail the intriguing and inspiring life story of the mysterious man-cat, Professor Genki. Beware: this episode is for mature audiences only, and anyone faint of heart, or with a history of heart problems, cat allergies, or high moral standards should probably do anything else when this mind-bending episode breaks the Internet next week.

Saints Row: The Third is now available in North Amercia, and Australia for the PS3, Xbox 360, and Microsoft Windows.