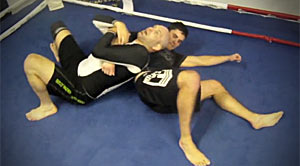 It’s only in the past two years that Lindland has been struggling with consecutive losses, most recently to Mamed Khalidov at KSW XVI in Poland, and Robbie “Ruthless” Lawler at STRIKEFORCE: St. Louis to a KO (punches) in round one. His age might be a possible factor, and with only one MMA fighter in the world to prove that statement is wrong, Randy Couture (who is the oldest title holder ever in the UFC or MMA), it is plausible. With that said, Lindland hasn’t officially announced retirement from the sport yet, and has been active in addressing the issue of the lives of fighters outside the cage. He also appeared in a feature-length documentary on MMA called Fight Life, directed by James Z. Feng that was released this past summer.

“I’m not retired… I still possess the skills and am learning new things every day. I just have no plans of fighting soon, and I’m prioritizing things differently. I’m focusing more on the money-making opportunities in MMA right now.”
–Matt Lindland, source: sherdog.com

Lindland, who is also known for winning a silver medal in Greco-Roman wrestling at the 2000 summer Olympics released a video on his Team Quest website demonstrating his wrestling skills, and shows us how to pull off an effective arm spin.

Since wrestling has been a topic of discussion lately, and fighters are utilizing this technique even more now, why not see a perfect demonstration by a guy who’s been at it since the age of 15. Check out the video, and feel free to leave a comment below.