The ABCs Of Death Announces Contest Winner “T Is For Toilet” 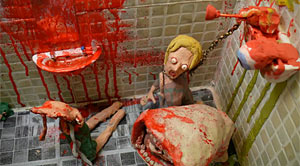 Today THE ABCs OF DEATH made the long-awaited announcement that T IS FOR TOILET is the winner of the horror film contest. Lee Hardcastle is the creator of this four-minute short film, and will be the 26th director to include his work in a feature film alongside some of the genre’s most talented new blood like: Jason Eisener (Hobo with a Shotgun), Srdjan Spasojevic (A Serbian Film), and Xavier Gens (Frontiers, Hitman) just to name a few.

Lee Hardcastle will also snag up a whopping $5,000 (USD) from the win to help him in his creative journey as the “next great horror filmmaker.”

You can read the full official announcement right below.

Drafthouse Films, Magnet Pictures, and Timpson Films have announced today T IS FOR TOILET by Lee Hardcastle as the winner of their contest to find the “next great horror filmmaker,” which finalized the lineup for THE ABCs OF DEATH – a highly anticipated anthology film featuring segments directed by over two dozen celebrated filmmakers in what Fangoria calls, “a stunning roll call of some of the most exciting names in horror across the world.” Inspired by children’s educational books, the feature is comprised of 26 individual chapters, each helmed by a different director assigned a letter of the alphabet. The directors were given free reign to choose a word to represent a form of death based on their letter. THE ABCs OF DEATH will be released through Magnet Releasing in 2012.

T IS FOR TOILET was an early submission to the contest, setting the benchmark for future entries and has since become a viral sensation from reporting genre websites and blogs. UK-based Lee Hardcastle utilized claymation to tell the nightmarish tale of a frightened young boy and his first attempt using the bathroom all by himself.

Submissions for the contest closed on October 1st, with 170 submissions from all over the world and over 50,000 votes cast from the public. After the public vote narrowed the field to 13 finalists, the 25 additional filmmakers of THE ABCs OF DEATH voted on the winning film.

“We are delighted that T IS FOR TOILET was as popular with the other directors as it was with the public,” says co-producer Ant Timpson, “and we are thrilled that Hardcastle’s work will be seen alongside modern horror’s greatest filmmakers.” Co-producer Tim League added, “We are extremely happy about the quality of many of the shorts and were impressed with the emerging talent in the genre scene.”