The Elder Scrolls V: Skyrim Review – Or: I Spent Five Years In Tamriel One Afternoon 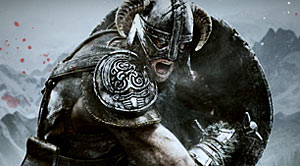 Get ready to have your social life vanish quicker than Rick Perry’s train of thought. The Elder Scrolls V: Skyrim is on store shelves. Clear your schedule, dump the girlfriend (unless she likes video games, in which case she’s a keeper) and make sure the cat’s liter box can handle about a week’s worth of deposits… it’s time to dive into one of the biggest RPGs of the year! Join me, your faithful and occasionally dragon-slaying reviewer, as we journey to an age undreamed of, where we shall tread the jeweled thrones of the earth beneath our Reeboked feet… shit… wrong franchise. Let’s start over.

The Elder Scrolls is one of the most venerable series in the industry. Kicking things off in 1994 with Arena, Bethesda first introduced gamers to the world of Tamriel. Daggerfall, the 1996 sequel, pumped things up a notch in terms of the franchise’s hallmark: a wide-open, densely populated and overflowing with quests world. Morrowind, released in 2002, featured a gigantic leap forward in graphical quality for the series, a calling card that has stayed with the brand ever since. 2007’s Oblivion pushed the gaming rigs of the day to their fullest potential and remains the crowned jewel of the series.

I should add the caveat “thus far” to that last statement. Skyrim is poised to take some shine off Oblivion’s luster. Hardware punishing specs, over 100 hours of promised content, outdoor environments that teem with life and movement… The Elder Scrolls V: Skyrim is without a doubt one of the most eagerly anticipated products of the year. Can it survive a mountain of hype and deliver a worthwhile quest? This reviewer certainly hopes so, I need to keep my dragon-slaying skills finely honed if I hope to one day slay the Evil Tormenting Bosses in their noxious lairs.

Ooh, the Evil Tormenting Bosses are far toothier than I recall…

This is Yell! Magazine’s review of The Elder Scrolls V: Skyrim. Available for PlayStation 3, Xbox 360, and PC. For optimal graphical face-melting goodness, the PC version was used. I, therefore, invite console fanboys to suck it! [Editor’s note: “It” could indicate any number of appendages. We strongly caution readers against sucking anything TheMatt offers you, points at you, pokes you with, or whips out. Sincerely, Evil Tormenting Bosses.]

Condensing an Elder Scrolls tale into a few short paragraphs is like asking Rosie O’Donnell to squeeze into a pair of size 0s: it’s just not gonna fit and the giblet overflow is going to be hazardous to anybody standing close by. You’re perfectly welcome for that disturbing mental image, by the way. Sweet dreams.

Here, have a free hole burned into your retinas. My treat!

Skyrim is not a continuation of previous chapters so much as it is a massive leap forward. The plot occurs a full 200 years after the events chronicled in Oblivion. Turns out the anarchy and violence you fought to avoid in Oblivion wasn’t so much avoided as madly barreled into like a blind quarterback told to pounce on a cheerleader. The realm is in chaos, city states are in open rebellion and the fat lady is clearing her pipes. Enter: You! You’re free to name your character as you please from the outset, but I chose to name mine Yu just to fuck with NPCs a bit.

Following the requisite opening sequence where you’re transported in some sort of vehicle while the game engine does its best to wow you, your character is led to the chopping block to await the executioner’s ax. Luckily, a dragon attacks. Which is just about the only time that the sentence “Oh, thank God! A fire-breathing dragon is destroying the village!” is ever likely to be uttered. On the run, you have to make a choice between escaping with a loyal soldier of the Legion or to join forces with a rebel. Either choice will have repercussions throughout the remainder of the game.

A short tutorial segment later and the wide-open world of Skyrim is yours to explore at your leisure. Skyrim categorically does not give two tugs of a dead hummingbird’s tail feathers if you never again participate in its main quest. Oh sure, you’re given a few general plot-related quests to run down, but if you choose to flip the bird to all this dragon-slaying nonsense and would prefer to go look for some whores to ravish, more power to you!

Now that’s what I call a sideboob! QUEST! I meant SIDEQUEST!

Roughly a third of Skyrim’s 100-plus hours will be spent completing its main story. The rest of your time will be spent rummaging every nook and cranny for optional content, which almost always ends up a more worthwhile expenditure of your time and effort. This isn’t to say that the main quest isn’t entertaining. On the contrary, it’s a tale fraught with palace intrigue, rebellion, backstabbing, and general mischievousness and I enjoyed every second of it. But it’s the small, practical things that will keep you coming back for more. Marriage, owning property, spending a ridiculous amount of time furnishing said property… all of these things are what make Skyrim more addictive than a cinnamon bun dipped in cocaine with Kate Beckinsale’s phone number buried in its gooey center. I found myself doing a dozen sidequests simply so I could earn enough cash to pay for that magical sword that I knew would just look absolutely smashing hanging on top of my fireplace.

I also bought my kitty a bow and set of armor. He’s ADORABLE!!!

And therein lies Skyrim’s greatest asset: It caters to the obsessive compulsive in all of us, the hoarder that isn’t satisfied until he’s owned one of every sword in the game, completed every optional quest and given an orgasm to every hooker in every town. (Don’t bother, already beat you to it.) The main story is memorable, but you’ll have forgotten all about it while picking out drapes that match the carpeting in your house.

Read about the gameplay, presentation, and the verdict after the jump…