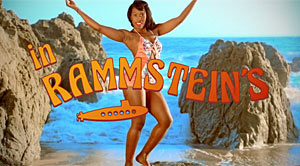 As promised by Rammstein, the new single “Mein Land” off the upcoming album Made In Germany 1995-2011 just hit internet waves today.

At first glance the video seems like a peaceful 60s homage to Elvis Presley’s Blue Hawaii with beautiful babes in bikinis, lots of hip movement, surfing, and suntan lotion rubbing. With captions in the video like “Here are the girls!”, and “It’s fun that never stops!”, how can you really take Rammstein so seriously? You simply can’t. Rammstein is a perfect example of a band that knows how to have fun, and be controversial at the same time. Sure, it’s nothing like their uncensored “Pussy” video which, was released back in 2009, but you still get that Rammstein punch near the end of the video with some nice scenes of nudity, fighting, and some girl on girl action.

A full European tour in support of Made In Germany has been confirmed that will spawn from November 2011 to March 2012.

Now, I urge you to check this music video out, it’s awesome!