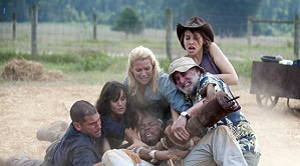 One of my biggest complaints with The Walking Dead last season pertained to the haphazard pace of the series, which would deliver two high-octane set pieces in one chapter and have the characters meander about in the next. I’d hoped that, with the episode order doubling this year, the problem would resolve itself, but it appears the show runners are treating the season as a single 13-hour movie with obligatory cliff-hangers every 45 minutes or so. I understand the growing importance of the home video market, especially for genre series, but TV producers ought to remember that their initial audience can’t watch every episode back to back.

Anyway, this chapter of The Walking Dead, “Cherokee Rose,” doesn’t present a story so much as a collection of vignettes apprising us of each character’s emotional state. All the subplots deliver in terms of low-key drama. However, no discernible theme unites them. Heck, I’d settle for a cohesive sense of tension. We know from last year’s pattern that a big event is coming our way, but the episode doesn’t build up to it so much as introduce the notion by way of obtuse exposition.

To be clear, I don’t mean that the episode lacks action, though it’s worth noting Daryl doesn’t shoot anything in the head this week. Instead, he visits an old shack and finds evidence of someone eating canned tuna. Like him, I first suspected Sophia, but now I wonder if the writers are setting up a more nefarious presence. At any rate, I’m pleased everyone’s favorite tracker remains safe and sound, for now. The man’s even got time to pluck the titular rose for Carol, proving himself the hillbilly equivalent of a jujube: hard on the outside, but soft and chewy on the inside.

It’s not all sweetness though. As usual, we get one extraordinarily gory scene, this time as our heroes pull a bloated walker from the bottom of a well. The thread doesn’t go anywhere, but then that’s the point. I appreciate the realism of our heroes failing at some of their more mundane tasks. After all, I can’t imagine this sort of thing came up too often in the Old World, which might explain why T-Dog just stands there instead of lifting the creature’s feet. If anything, the subplot shows that he remains the same whiny screw-up, despite his telling Dale otherwise a few minutes prior.

Glenn, on the other hand, continues to impress, noosing the Sadako walker in the middle of a panic and seducing a young woman while holding a pack of condoms. Mind you, I understand Maggie’s attraction. Like Daryl, the former delivery boy has adjusted particularly well to the new order. The secret, I think, lies in maintaining humble ambitions like riding a sports car or having hot whoopee in an abandoned pharmacy. What puzzles me, though, is the Greenes looting the village on a regular basis instead of emptying the relative danger zone in one go: subtle foreshadowing or classic The Walking Dead plot hole?

Either way, the ambiguity doesn’t compare to that in Shane and Andrea’s conversation, which might have been my favorite bit this week if I’d understood the words coming out of the former deputy’s mouth. I mean, is that a thick southern brogue actor Jon Bernthal is sporting, or is his accent coach just happy to see me? OK, I have more pertinent inquiries. For example, has Shane deliberately confessed to killing Otis, and does Andrea see through his cryptic double-talk?

Of course, the big question this season lies in whether our heroes should continue believing in a higher power. Hershel thinks so, but Rick is still reeling from that holy Rochambeau he got in “What Lies Ahead”. All that God talk is starting to feel like overkill to me, but their discussion, clichéd as it may be, does sow the seeds of a larger conflict down the line. After all, as Lori’s cliff-hanger pregnancy indicates, this week is all about the proverbial calm before the storm. I guess that works as a theme of sorts.