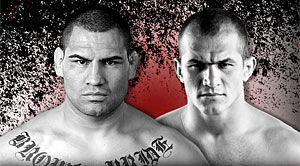 The UFC has just unleashed this new video promo for the upcoming fight between heavyweight champion Cain Velasquez vs. Junior dos Santos that hits network television for the very first time this Saturday on FOX. “The big one” as most UFC fans would say.

What makes this promo so interesting is that the UFC has combined an old rant between boxing promoter Bob Arum and Ariel Helwani (from MMA Fighting). Bob, who’s had many controversies over the years, has insulted UFC Fans and MMA fighters in the past like this:

“It’s guys rolling around like homosexuals on the ground. It is not a sport that shows great, great talent. The guys can’t throw a punch to save their ass. When it lands, the guys have no chins.”

In the video promo, the UFC hits back each insult Bob gives with a dose of historical knockouts, exciting submission, and Hollywood celebrities who have been fans all along. It’s an amazing trailer that should silence him, and other critics alike who dislike MMA.

As a bonus, if you are new to the sport of MMA, below is a video of UFC stars like Forrest Griffin, Rashad Evans, Ryan Bader, and bunch more giving their predictions on who will be victorious this weekend. Check it out, and let us know your thoughts in the comment section.