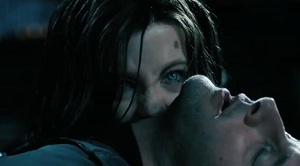 Let’s just skip Thanksgiving and Christmas and go straight to January. Wouldn’t we all rather see Kate Beckinsale in 3-D than spend any amount of time with our families? The first trailer we were treated to some time ago alluded to something very powerful, and this second trailer reveals what it is or could be. There is a hybrid child, a first in the Underworld world, and there’s a massive lycan. I’m not sure if the two are one and the same, but all of this seems cool.

In Underworld Awakening, Selene has been imprisoned for 12 years, how dare they treat Kate like that, by the humans. As fate would have it, the humans have been conducting experiments on her in their quest to find a vaccine to eradicate her kind. Now, Selene is pissed. Down with the humans.

There’s a part of me that sees a bit of Species 2 in this, especially if the humans had something to do with creating the massive lycan. There might also be elements of Resident Evil in this. While the first and second film in the Underworld franchise were clearly a take on Romeo and Juliet, Awakening might better be described as Othello, or perhaps a V.C. Andrews drama with an illegitimate child, the hybrid child mentioned earlier, which is clearly the offspring of Selene and Michael.

Underworld Awakening is at least presenting us with an interesting enough story, and judging from the trailer, the visuals look amazing (nope, not referring to Kate Beckinsale’s derriere as she works he way down a heating duct).