The Walking Dead 2.03: Save the Last One 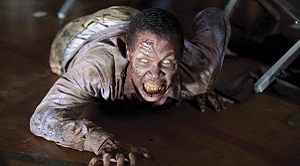 We all knew it had to happen: somebody at some point was going to do something despicable. It’s worth noting that Deputy Walsh offers to sacrifice himself before using Otis as distracting zombie yum-yum. Unfortunately, his partner won’t carry this guilt, so he takes it upon himself, reasoning that it makes more sense for one person to die than three, including young Carl. In other words, Shane makes an ethical choice. He just happens to be working with a different moral code, perhaps one better suited to the harsh reality surrounding our protagonists.

You see, nine episodes in, AMC’s The Walking Dead is finally tackling the sort of material to which the source comic book owes its success. This may strike some as ironic, given how much “Save the Last One” diverges from the established plot. However, that’s exactly what a good adaptation ought to do: fiddle with the details to keep the spirit. We still get our weekly doses of undead mayhem and Daryl shooting stuff in the head, but, at its core, the episode comprises a series of ethical dilemmas illustrating how each character perceives the new order.

Take, for example, Daryl and Andrea’s debate over whether to kill the hangman turned walker (or, as I like to call it, the hanger). Daryl perceives the suicide victim as a quitter and would rather not waste his arrow. He seems unfazed by the fall of civilization, perhaps because of his challenging youth. After all, the undead apocalypse put everyone in the same boat, which means he doesn’t have to row alone anymore. His comrade, on the other hand, identifies with the creature and wants to put it out of its misery. I wonder if she sees in it the path not taken or the one imposed on her.

Andrea also resolves her issues with Dale over what went down in “TS-19.” Curiously, the old man ends up apologizing for saving her. In our universe, he’d be regarded as a hero, a caring bystander who used his wit to prevent another senseless suicide. In theirs, he robbed his friend of a dignified demise, forcing her to live out a nightmare. Their feud evokes the ongoing euthanasia debate, except Andrea strikes me as perfectly healthy. It’s the world that’s got a terminal disease.

This leads us to Mr. and Mrs. Grimes, who must decide whether saving Carl is the right thing to do, given he’ll have to grow up in the Land of the Dead. Lori’s position makes no sense to me. Is the woman suggesting that anyone who doesn’t get as pampered an existence as hers should be put down? It seems to me Carl will find joy and purpose the same as children in impoverished nations or people in the Middle Age. Pointing out their son remembers the deer he almost touched rather than the gunshot that pierced his chest, Rick makes a similar argument, albeit with more heavy-handed symbolism.

For the sheriff’s deputy, the deer represents hope, a glimmer of the divine in a world turned to hell. For Carl, though, it’s just a pretty thing he saw. Whereas his parents are stuck somewhere between denial and bargaining, the boy has ploughed through all the stages of grief straight to acceptance. As Maggie tells Glenn, who admittedly seems an odd choice to shoehorn the season’s religious theme, “feel free to believe in God, but the thing is you have got to make it OK somehow.”

To be clear, I don’t believe the writers of The Walking Dead are pushing an atheist agenda, whatever that means. Rather they’re depicting a fictional universe in which the characters can reasonably assume God has abandoned them. Yes, the concept is a bit of a stretch, considering how spiritually works, but I like the question it raises: If the point is for our heroes to let go of their Old World values, should they also give up on spiritual salvation?

Death count since the beginning of the series: six.