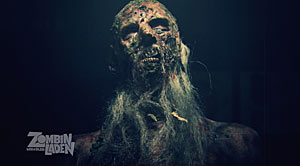 The United States has failed us again! Operation Neptune Spear just wasn’t effective enough, and bin Laden returned from the dead a month ago in a trailer called, you guessed it, Zombinladen. Obama you got to get your shit together this time around, it’s going to take more than the special forces to take out this evil menace.

The fake trailer was made for a French contest called “Panic! Reverse.” It took director Clément Deneux four days to shoot Zombinladen, and here is what he had to say.

When I was 10 years old, I saw Terminator 2… I said to myself, “Gee, this must be cool — to make movies!” I finally went on to do some creative arts and communications studies at Estienne Design School, and that’s where I met Gaël Lucien. Since then, he has worked as a CGI artist on every project that I’ve made.

After getting my degree, I tried many kinds of artistic associations. Then I finally decided to take the plunge as a freelance director. I primarily work for the Parisian production Gedeon on TV channel identities. Three years ago, I made my first horror short film, entirely shot with a mobile phone. This movie [Les Ongles (Nails)] was chosen to be next to Jaume Balaguero’s [REC] on the bonuses of the DVD. I was looking for ideas for something new and more ambitious. When I heard about the Panic! Cinema contest and its fake posters and trailers context… I found this very exciting!

It was the end of May and the death of Osama bin Laden had just been announced… I was looking for some funny pitches for the Panic! Contest. This “21st century Super Villain” character created by the media and Bush’s government really fascinated me. In my eyes, Bin Laden became a real-life boogeyman, the kind of creature who could throw planes onto the world’s tallest towers while keeping safe with his mates in some secret caves… So, one day, when this stupid Zombinladen pun came to me, along with the tagline, “The Axis Of Evil Dead,” I just laughed in the shower! Then I quickly realized I was onto something funny: Just because there was some kind of logic to bring the real character, his incarnation to the people’s mind, and the odd circumstances of his end, to the transgressive universe of horror movies. Just to see what it could do!

The storyline came very fast, then I designed the poster and just afterward the storyboard. Once the visual identity was done, I started to meet people and friends here and there… At this time, I was only thinking about it as a “fun, creative project” to do during my summer holidays. To my great surprise, almost everyone said instantly, “I’m in!” Thanks to everyone’s enthusiasm and motivation, the film most definitely rose to another dimension.

Shooting a fake trailer for a movie, it’s not so common. How did you feel about it?

It’s not so rare since the Grindhouse fake trailers proved it could be a proven movie form in its own right… It’s both a very playful format and a dangerous exercise on set. … Playful because it leaves a great part to the viewer’s imagination. And dangerous because you have to forget totally the notion of sequence or narrative suite in order to find the pure intention, the substance of the potential movie. We were sometimes frustrated by missing such or such take on the set, but when in the editing room, we realized we could have so much more if we just stuck to the essential.

Which sequence do you keep in mind?

The sequence where Shane goes to war… unfortunately most of it was cut to make the trailer… It was our last sequence to shoot, on the last day. We totally improvised the thing. Something magical happened: The evening light was splendid, Carole and Shane were perfect. The scene took life, just in front of us…

We shot three full takes and each one was excellent. I remember feeling like I could just keep on shooting all night after that.

I learned a lot of things on this funny job. I’m looking forward to start a new project.