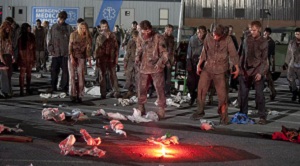 The latest episode of The Walking Dead, “Bloodletting”, starts with a much-needed flashback in which Lori explains why she’s such an insufferable whiner. As it turns out, Mrs. Grimes needs to let her frustrations out to feel like she’s being acknowledged and move on. The fact she admits this about herself and, more importantly, understands how unreasonable her process comes across goes a long way to excusing her outbursts with Shane last year and with Herchel, the veterinarian offering to save her son. Still, someone needs to slap the woman upside the head, perhaps while mumbling, “Brains! Send more brains!” At any rate, what I really want to discuss is the exchange that follows as Shane informs her that Rick was hurt in the line of duty. With no one to lean on, Lori takes the news with surprising fortitude, and we finally get a sense of what the two sheriff’s deputies see in the chronically passive-aggressive redhead. She asks, “How do I tell my son his father’s been shot?” He answers, “You don’t have to do it alone.” Shane is right of course, astute even, but then Lori walks away and handles the matter on her own.

That’s human nature for you. People are hardwired to reject the very support for which they form communities. Take, for example, T-Dog’s sudden desire to abandon the group, even though he can’t afford it right now. I’m inclined to forgive his randomly pulling the race card on account that he’s got a mad fever (not to mention a stupid name). However, the principle still applies. The zombie epidemic may have inspired our heroes to pool their resources, but emotionally they remain as isolated as ever.

Shane, for example, wants to split because his BFF has inadvertently stolen his sense of purpose. Admittedly, Rick can hardly be blamed for reclaiming a family that loves him, but I find it curious that Deputy Walsh still goes out of his way to protect his partner, offering sincere marital advice and volunteering to get medical supplies at a ghoul-infested high school (otherwise known as a high school). The man understands the responsibilities that come with human attachment. He just sucks at reaping its benefits.

The same can be said of Andrea, who missed out on oblivion to ensure Dale lives on but now refuses his support and shoots eye daggers at anyone so bold as to show concern. Her conversation with Carol fascinates me. It consists of a series of apologies as each woman, knee-deep in her own pain, gets around to acknowledging the other’s turmoil. This strikes me as ironic, given everyone’s pitched in to find Sophia, but again pooling resources and sharing a burden are two different things. Lori hasn’t lost anyone yet, though she knows the feeling. Her isolation stems from being married to Rick, who keeps shutting everyone out as part of his messiah complex. That’s why the sheriff’s deputy thinks he can give two pints of blood to Carl, run miles back to Lori, save Shane and new guy Otis from a horde of flesh-eating walkers, and then stop Lex Luthor from unleashing his lizard men. More to the point, that’s why the man feels guilty about submitting to a higher power when he should have been looking for a little girl, which brings us to the season’s apparent motif: faith.

I didn’t catch on last week, but it seems we’re getting a thematic arc this year. Spirituality seems like interesting territory for The Walking Dead, and I dig that the writers are posing the hard questions two episodes in. Consider Daryl’s speech to Carol and Andrea, which, for all intents and purposes, associates prayer with giving up. The tracker would rather put his faith in his fellow man, God’s favored creation, and maybe that’s the point. After all, what religion doesn’t have communion?

Also, his telling a walker to shut up while shooting an arrow in its forehead was badass.