Batman: Arkham City Review – Or: I’m Batman! Also Catwoman, Depending On My Medication And The Number Of Witnesses 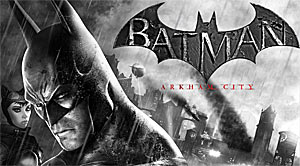 Now here’s an interesting reversal: Batman: Arkham Asylum hit store shelves with little fanfare and lowered expectations. After all, it had two major negatives going for it: it was both a comic book game and a Batman game. Traditionally speaking, neither of those factors are indicative of quality gaming. We’re all familiar with the lack of quality products based on existing licenses, and the Caped Crusader himself would be ashamed of some of the games released under his banner.

To the amazement of game reviewers everywhere, not only was Arkham Asylum a stellar Batman game, but it also easily won several Game Of The Year honors with various publications and websites. A combination of thrilling fight sequences, mixed with a killer story, great characters and inventive, not to mention detective, gameplay came together in one solid package. Arkham Asylum is the definitive piece of evidence that proves that licensed games can reach the heights of Christopher Nolan’s The Dark Knight rather than plumb the depths of Joel Schumacher’s Batman & Robin.

But this time, the impetus is on developer Rocksteady Studios to release a worthy follow-up to what many consider one of the greatest games of all time. Once minimal expectations are now sky-high, and all eyes are on Batman: Arkham City to deliver. Will the Dark Knight soar to new heights… or is this flying rodent on a collision course with somebody’s windshield?

This is Yell! Magazine’s review of Batman: Arkham City, currently available of PlayStation 3 and Xbox 360. For review purposes, the PS3 version was used. PC owners will have to wait till November 15th to play with their Batarangs. Not that there’s anything wrong with that. I play with my Batarang all day long, in the privacy of my own home. It’s ribbed, has a comfy grip and the end is pointy for maximum penetration.

While the fictional city of Gotham has never been much of a tourist spot, unless you were planning on getting your picture taken with your rapist/mugger/murderer, Batman’s erstwhile kingdom has now degenerated into a police state. No man, not even a Batman, can stem the tide of maniacs and loose cannons roaming the streets with reckless abandon. When the story opens, even minor offenses are punished by deportation to the city’s newly opened prison district. How locking up minor offenders with a character as completely Fruit Loops as the Joker helps in any way is a question better left to wiser sages than me.

The segregation of Gotham’s criminals in a sort of super-max prison district is the brainchild of one Hugo Strange. Strange is one of Batman’s lesser known enemies, especially outside of comic books, but the criminal mastermind has one advantage none of the Bat’s other foes ever possessed: intimate knowledge of the man beneath the cowl. Through various means, Strange is able to determine that Bruce Wayne is, in fact, Batman, which gives him leave to inflict both personal and physical harm to our hero.

Along for the ride is a veritable who’s who of Batman’s rogue gallery. The aforementioned Joker returns for an extended role with sidekick Harley Quinn in tow as usual. You can expect appearances from such perennial Bat-foes as Two-Face, Bane, Ra’s Al Ghul, The Penguin, Solomon Grundy, and a baker’s dozen of additional cameos from the Bat universe, many with their own unique portions of Arkham City, decorated to suit their individual psychoses. Batman isn’t alone in facing down the villains this time around. Perpetual sidekicks Robin and Nightwing show up for moral and combat support. Occasional antagonist and romantic interest Catwoman, in all her cleavage-baring glory, is in here as well.

Batman: Arkham City’s main storyline will keep you playing for a solid 10-15 hours. That’s if you stay on the straight and narrow. If you deviate from the path and explore the game’s innumerable side quests, Easter egg hunts, and various other diversions, you can easily double that playtime. And believe me, you will want to explore the large, open game world. People suffering from ADHD need not apply or risk never being heard from again.