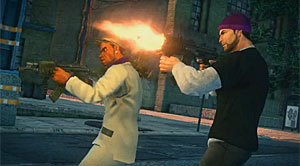 Terrorist insurgents? Been there. Unruly Taliban? Done that. The Third Street Saints? Now that’s a challenge.

The only military force in the world capable of answering the call is STAG, the Special Tactical Anti Gang unit, outfitted with hover jets, speeder bikes, laser tanks, and one hell-of-a flying aircraft carrier.

As STAG occupies Steelport and takes aim at both the Syndicate and the Saints, you’ll have to adapt, overcome, infiltrate, penetrate, and execute all sorts of military-sounding words.

See STAG for yourself in the new Shock and Awesome trailer for Saints Row: The Third.