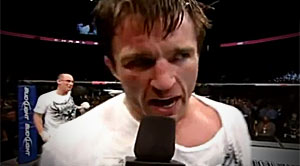 It has been over a year since Chael Sonnen last fought Anderson Silva for the UFC Middleweight Championship on August 7, 2010, at UFC 117. Sonnen who is notorious for trash talking since the buildup of that fight, and now continues to slander Anderson with anything he can think of. As he stated previously, Sonnen’s goal is to retire “The Spider” from the UFC. Sonnen last defeated Brian Stann at UFC 136, and here is that memorable quote he said in the post-fight:

“Anderson Silva, you absolutely suck. Super Bowl weekend, the biggest rematch in the history of the business, I’m calling you out, Silva, but we’re upping the stakes. I beat you, you leave the division. You beat me, I will leave the UFC forever.”

Expect Chael Sonnen to fight Anderson Silva in a rematch for the Middleweight belt on Super Bowl weekend, but nothing has been confirmed yet.

Check out all three videos, and let us know what you think in the comments section below.