MMA: “The Korean Zombie” Chan Sung Jung – We Need To See More Of That Twister Submission At UFC 140 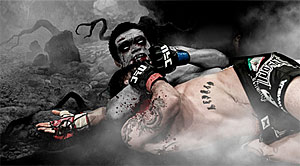 Jung Chan-Sung, also known as “The Korean Zombie” (the way we prefer to call him here at Yell! Magazine), will be entering the Octagon for the second time at UFC 140 on Saturday, December 10th. Jung will face his toughest, and most experienced MMA opponent to date, that’s Mark “The Machine” Hominick. The guy who practically looked like Chunk from The Goonies in his last fight, and losing by unanimous decision against José Aldo for the UFC featherweight championship. Looking back at the history, The Korean Zombie had an excellent run in professional kickboxing with a record of (15-6). Moving into MMA, at only 20 years of age, he won his first Sambo tournament, and in the same year he dominated the lightweight division of the Pancrase Korea Neo-Blood Tournament in Busan, South Korea.

In 2008, he continued to be victorious, defeating Jo Jung-Hun, and winning the Korean FC: Tournament Series by unanimous decision (his previous two fights where won by a triangle choke and armbar). Next up for The Korean Zombie was Japan, where he defeated three Japanese fighters in a row, two of them by submission, and one by knockout (punch) after 17 seconds in round one, which marked his second knockout win since 2007. His first loss was against Masanori Kanehara by unanimous decision at Sengoku 9 on August 2, 2009, where he returned three months later to defeat his first American fighter, Matt Jaggers, in a triangle choke.

Up until this point and before entering any North American fights, The Korean Zombie had a pro MMA record of (10-1), wining most of them by submission by either rear naked choke, armbar, or triangle choke. Jung came to skid when he faced Leonard Garcia at WEC 48 on April 24, 2010, losing to a split decision, and losing to George Roop to a knockout (head kick) at WEC 51. Two fighters who Mark Hominick has also faced, but defeated.

Leonard Garcia vs. Jung Chan-Sung - Fight of the Year

The Korean Zombie made his first comeback win in his MMA career when he faced Leonard Garcia a second time, and defeating him with the first (and only) twister submission in UFC history. That also earned him “Submission of the Night,” and above average pay of $5,000.

“When I started going in for the technique, I knew that there was less than 30 seconds left, so that’s actually one of the reasons why I went for that move,” Jung said. “If there was more than 30 seconds, I probably wouldn’t have tried the move, but since there wasn’t much time left, I just kind of went for it. Frankly, it worked out.”

Jung has also stated that he learned the twister submission by watching Eddie Bravo (practitioner of Brazilian Jiu-Jitsu) video clips on YouTube.

The big question now is how will he face Mark Hominick at UFC 140. In comparison to Jung, he’s an MMA vet that has had more experience in the cage, defeated two of his most challenging opponents, fought the UFC featherweight champion, and has better knockout power. Hominick has also proven to have lots of endurance when he last faced José Aldo, showing no signs of slack in the last few rounds (he reinforced that by doing a few extra push-ups after the fight). Both fighters love to strike, and their takedown accuracy is equally the same, so expect an exciting fight on December 10, 2011, that could also very well gain “Fight of the Night.” So don’t miss it!