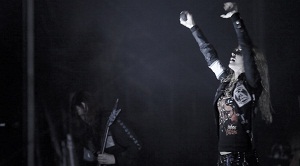 Our Yell! Magazine team had the distinct pleasure of going to see Arch Enemy perform the other night… and we were able to interview Michael Amott and Sharlee D’Angeo prior to the show (more on that later).

The North American Khaos Tour, in promotion of Arch Enemy’s latest effort Khaos Legions, kicked off on September 8th and it finishes up on October 4th. If you want to see some “pure fucking metal,” you better make sure to check them out at a venue near you (see the Khaos tour schedule). It doesn’t matter if you’re a fan of Arch Enemy or not, nor does it matter if you’ve ever heard of them or don’t like their death growls or don’t like the fact that a woman fronts the band, there is something in their music that will appeal to some part of you (as long as you like metal).

Arch Enemy has been around for 15 years (11 with Angela Gossow) and we hope like hell that they will be around for many more years. They also deserve more recognition from the mainstream than they get. See, as great as the legends are, they are getting old and there is definitely a new breed, a new generation taking the metal reigns. While we metalheads appreciate the high regard with which you hold our heroes, you have to face the reality that they don’t have much mileage left; you must embrace change; you must enter a new era. Many of us fans have already accepted the future, while maintaining a healthy appreciation for the great ones, and that future includes Arch Enemy.

But I digress. The show featured four bands, opening with Chthonic, followed by Skeltonwitch, and DevilDriver. If you’re a regular at Yell! Magazine, you know that we’re fans of DevilDriver. Just check out our interview with the Dez Fafara and Mike Spreitzer. DevilDriver’s performance didn’t fail to disappoint. Other than Dez being less intelligible, DevilDriver sounds just the same live as they do on record.

Chthonic was the surprise of the night, having never heard of them. They had a great vibe, great sound, and great energy.

In case you haven’t heard of them either, they are a band from Taiwan with a distinctive agenda advocating for Taiwainese independence and for the freedom of Tibet. I almost expected Metallica to show up and play when Chthonic’s set began since their prerecorded intro music sounded like “Ecstasy of Gold.”

Not gonna lie about Skeletonwitch; I heard one or two songs and went out for a smoke or a few. So, not gonna say anything about them.

On to the headliner, Arch Enemy. They were simply amazing to see: heavy, loud, fast, intense, detailed, professional, engaging…

If there was anything to complain about during Arch Enemy’s show, it was the volume at the start of their set; it was too loud for the venue. Loud isn’t a problem, but there’s a problem when the amps crackle like they’re going to explode. Thankfully the issue was resolved quickly and didn’t have an effect on our overall impression of their show.

Arch Enemy blistered through a great set list that featured a good balance of fan favorites with new material, starting things of with Khaos Legions’ openers, “Khaos Overture” and “Yesterday Is Dead And Gone” — utterly powerful. (See below for the full set list.)

And just like with old-school metal acts, we were treated to a guitar solo… and not just one, but two. And these solos weren’t just some rudimentary scales and playing around with effects, the Amott brothers are true virtuosos. So there’s the classic metal aspect of Arch Enemy, but when listening to or seeing them you also have to consider the modern aspect of their sound. That element comes in the form of Angela Gossow and her death growls. In a word she’s just powerful. You might also through in intense and beautiful. With regard to that last adjective, that’s not what Arch Enemy is about.

Arch Enemy is not some label-generated product that put a pretty face up front to attract posturing metal fans. Gossow’s lyrics are politically infused and speak of human rights and liberties; her stage presence is commanding; her voice is brutal. Even if you don’t like her singing style, you can’t deny that she is truly a charismatic frontwoman — the way in which she thrusts her fists, pounds her fists, thrashes her head, stands on the stage amps, and owns the stage is truly compelling.

In the end, Arch Enemy is a band to be seen.

Don’t forget to check out our exclusive video interview with Arch Enemy’s Michael Amott and Sharlee D’Angelo this week.