Dead Island Review – Or: BRAINNNS! AND MOJITOS! MOJITOS WITH BRAINNNS! 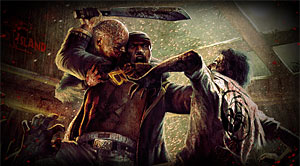 Take the action from Left 4 Dead, throw in a tropical island setting and you have a fair approximation of what you’ll be doing for most of Dead Island’s 15-20 hours. Its countless hours spent exploring every nook and cranny for spare loot. Dead Island wants to throw a Borderlands-style loot collecting system at the player, but it fails miserably. Like in Borderlands, every locale contains dozens upon dozens of suitcases, cabinets, dead bodies, and other assorted containers to open. These items respawn every time you log in to the game since Dead Island automatically creates an online arena whenever you play, allowing other players to drop in or out as they please.

My ongoing battle with lootaholism is well documented. I love me some loot. However, Dead Island has a nagging design flaw that makes loot collecting a slow, painful experience. Instead of simply opening a container when you click the action button, thus letting you collect what’s inside, Dead Island goes through the useless motion of actually making your character kneel or lean over as if they’re manually opening the thing themselves. The game does this EVERY. SINGLE. FREAKING. TIME! This multiplies the amount of time you’ll spend opening the game’s myriad of chests by a factor of 10, and it’s a glaring, stupid design idea that needs to be eliminated. You can practically hear Dead Island’s gears grinding to a halt whenever you encounter a hotel trolley filled with a dozen suitcases that need to be opened.

Sadly, looting is mandatory since you need the ample cash drops to upgrade or maintain your weapons. I’ll say this for Dead Island, its arsenal is varied and hilariously functional. Anything can be used as a zombie basher, from a pair of scissors to a length of pipe to a pair of oars. If you can grab it, you can swing it. But, and there’s always a but with this game, weapon durability is terrible. Most weapons will break after a half dozen or so swings, forcing you to pick up a new one or switch to an alternate on the fly. As I said, weapons are plentiful, so picking up a new one on the run is feasible, but this system creates more problems than it solves. Just as you’ll spend a ridiculous amount of time looting, you’ll spend an equal amount of time searching blindly for replacement tools of destruction.

This system applies to another genre staple: the health refill. You can carry health kits, but most healing will be done on the run from energy drinks scattered around the game world, which, you guessed it, you actually have to stop and drink EVERY. SINGLE. FUCKING. TIME. If your health is down to zero, and you don’t have a health kit, good luck mustering the patience needed to down about 5-6 randomly found energy drinks.

Screw this, I’m getting an Espresso.

While firearms become available in later stages of the game, their relative scarcity meanS that melee combat is your primary form of engagement in Dead Island. Think of Dead Island as a first-person Diablo, with all the repetitive clicking and catastrophic carpal tunnel syndrome that entails. Dead Island features a decent limb-severing mechanic, but really, how many times can you cut off a zombie’s head before it gets old?

I CAN’T STOP! IT’S SO ADDICTIVE!

I know I’m coming down hard on Dead Island, and it totally deserves it, but if you can tolerate its frequent design and technical flaws, there’s a somewhat entertaining survival horror game in there. I simply did not have mental fortitude to survive its broken, boring mechanics. Your mileage may vary.

Dead island isn’t likely to tax your hardware. I played it on both a mid-range PC and a top-of-the-line gaming rig and both were able to scale the graphics to a point where I managed to play without stuttering or frame rate drops. Dead Island isn’t Crysis 2. It boasts a wide open world and its tropical island undergoing massive zombie renovations is certainly both wide and open for exploration — but it’s so terribly dead. Pun not intended. I can understand why the resort feels dead but the crime here is that it feels like it was never alive at all. By comparison, Dead Rising 2’s mall had so many things to do that it makes Dead Island feel like a still painting.

Graphically, NPCs are stiff and far from lifelike. If it wasn’t for the lack of gore or drooling, you could easily mistake the living for zombies. Characters spout dialog while standing in one spot, stiff as boards and staring at you with their vacuous doll eyes. Enemy variety is decent, but eventually you’ll realize that you’ve killed the zombie in the green bikini a thousand times already.

Damn it, woman! No means no! I’m saving myself for the red bikini zombie babe!

Sound design is uninspiring. For a horror title, there’s very little in Dead Island’s catalog of screams, hacks, slashes, and explosions that elicits a fear response from the player. It’s all very generic, like the team at Techland downloaded the most popular scary sound files from the Internet and plugged them into the game.

Voice acting is bottom of the barrel, with each actor giving a performance that is the equal of their character’s one defining trait: Asian, tough guy, black guy, scared guy, zombie going “aaarrrrgh!” guy…

Dead Island is not a good game. It’s not even a well-made game. Techland took some ideas from the Left 4 Dead franchise, some mechanics from Borderlands, threw in Dead Rising’s open world concept and voila! They ended up with a game that is most definitely not the sum of its rotting, severed parts. Gamers should already know what to expect from a game that needed a Day One patch and several subsequent patches throughout the week. Let the folks at Techland know: we are gamers, not beta testers.