Will Brock Lesnar Be Ready For Alistair Overeem at UFC 141? 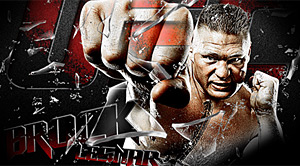 Brock Lesnar is finally scheduled to make his return to the Octagon on December 30th at UFC 141 against none other than current (or former, depending how you want to look at it) STRIKEFORCE champion Alistair Overeem. Overeem has been in contract talks for quite some time and has finally emerged with a UFC contract and a blockbuster fight that he has been wanting since Lesnar’s days as the UFC champ.

Brock Lesnar has not fought since he lost his title to Cain Velasquez at UFC 121 in October of 2010. His planned return to the octagon against Junior Dos Santos was foiled by another bout with diverticulitis. Now that Lesnar is fully recovered and ready to get back to action, he faces an opponent that has a stellar record of his own.

Alistair Overeem was the reigning STRIKEFORCE champion before he was cut by the organization for rejecting his scheduled fight against Antonio Silva in the semi-finals of the STRIKEFORCE Heavyweight Grand-Prix. He is also the reigning K-1 World Grand Prix Champion and the Dream Interim Heavyweight Champion, boasting wins against some of the most dangerous MMA fighters around.

This fight will be a number one contender match with the winner facing the winner of Cain Velasquez vs Junior Dos Santos and you better believe that this will be one very entertaining fight. Both fighters want to be the UFC Heavyweight champion and both fighters are going to go all out to get one step closer to that goal.