On-Air With Brian: Of All The Schwarzenegger Movies… 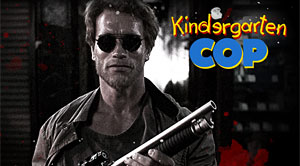 [Editor’s note: We are Yell! Magazine and will be knocking on Brian’s door to beat the shit out of him, or some sense into him.]

People always give me a hard time about my love for Arnold Schwarzenegger movies.

I honestly don’t know too much about him, his politics or his life before film.

I know he was a world-class bodybuilder, he loves the ladies, and he has an illegitimate kid.

But one thing I do know about him is his films. Good, bad, I know them all. And I’m somewhat sorry to say that the one I could watch the most, the one I cannot pass up whenever it’s on TV is… is…

God, I really don’t want to admit this, but it’s Kindergarten Cop.

Is it the one-liners? Is it Penelope Ann Miller? I don’t know.

Seriously, if I was scanning through the 20-plus movie channels that we have, and the choices included:

Nine times out of 10, I’d pick Kindergarten Cop. And I can’t explain why. I’ve tried and tried to figure it out. The movie isn’t anything spectacular and it’s not one of the roles mentioned when we talk about Arnold’s “Top Movies,” but for some reason it resonates with me.

I’m trying to figure out why. I’ve come up with a few possible explanations, and here’s what I’ve got so far:

1. When he hits that dad for beating on his kid — “You hit the kid, I hit you” — anyone who grew up with a horrible father knows the satisfaction this brings when you’re an adult. Seeing the abusive prick get his comeuppance is wonderful justice.

2. The one-liners aren’t just for Arnold; the kids are full of them. Phoebe even has the line of the movie. Many people quote “It’s not a tumor,” but that’s not even the best one-liner from this film. After getting run over by Crisp’s mother, Phoebe takes a bat to her in the shower room and utters the classic, “Not so tough without your car, are ya?”

3. It was Arnold’s first real foray into family films — I know, Twins came out two years earlier and is only rated PG, but at the time, it wasn’t something you’d sit down and watch with your kids. In 1990, when Kindergarten Cop came out, I was 14 years old, and even though I had seen Commando and Conan and Predator, this was the first time that I saw Arnold as a potential comedic actor. And it worked.

I also like the casting of Richard Tyson as Crisp. I remember seeing him for the first time in Three O’ Clock High and thinking, “this guy is going to be a huge movie star.” I was wrong, of course, but now, whenever I watch Kindergarten Cop, it makes me want to watch Three O’ Clock High, which is one of those ‘80s movies that never gets enough credit/love in all these online lists you see.

I still love most of Arnold’s films, but no matter what my mood is, I’m always ready for some Kindergarten Cop.