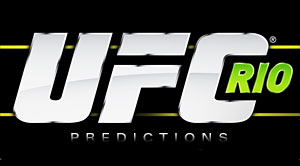 UFC 134 heads back to Brazil for the first time since being purchased by Zuffa, LLC and it intends to impress both attendees and TV viewers alike. The UFC seems to be determined on leaving a lasting impression on the city of Rio De Janiero with the fight card that it has put together. A card which includes UFC poster boy and Middleweight champion Anderson Silva defending his title against the last person to beat him: Yushin Okami.

Here’s a breakdown of the main fights along with a prediction for each one:

With Silva fighting in his home country you best believe he will aim to put on a show for his countrymen. Although, Okami, a very talented striker and wrestler, is not going to make it easy for Silva and will definitely give Silva a run for his money. Look for Silva to hold nothing back in this one and finish Okami off in the third round.

With Rua coming off a major loss that saw him lose the light heavyweight title, he will be determined to bounce back and get back in the title picture. With that, nothing can motivate Rua more than a win against a fighter that submitted him in their last meeting: Forrest Griffin. Griffin, on the other hand, has never quite been the same since his loss to Anderson Silva, and continues to look completely disinterested in the fight game. Look for Rua to come out strong in this one and win by highlight reel KO.

Brendan Shaub has made some very bold statements about his match-up with Antonio Nogueira, and it will be interesting to see if he can actually pull off a KO win against MMA great Nogueira. Big Nog is the type of fighter that does not believe in quitting, while Shaub is still a young fighter that has a lot to prove. Nogueira can and will squeeze out a decision win.

Lightweights always tend to bring excitemernt to UFC cards, and this one will be no different. Look for the Brazilian Barboza win by submission in the 2nd round.

Luiz Cane will waste no time in ending this one rather quickly by 1st round KO, making for a great start to the night.

Let us know what you think. Do you agree with the predictions? Have a few of your own? Let us know in the comments section below.