UFC 134: Anderson Silva’s Workout On Copacabana Beach – Are You Ready For The Spider? 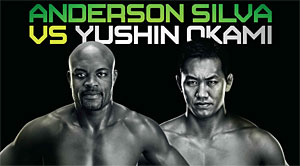