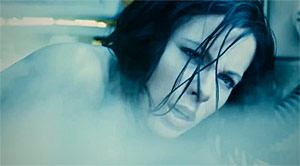 Fans of the Underworld saga have had some relief after hearing that Kate Beckinsale has reprised her role as Selene in Underworld: Awakening 3D also known as Underworld 4. Rhona Mitra appeared as Sonja in Underworld: Rise of the Lycans, which served as a prequel to the series, and she did a fantastic job at filling in the shoes for Kate. Although Rise of the Lycans was only a prequel, Kate definitely feels like it’s been a long break since playing Selene, and the fans, in general, just feel it’s been too long. Here is a statement she made at Comic-Con International:

Kate Beckinsale, star of the first two films, returns in her lead role as the vampire warrioress Selene, who escapes imprisonment to find herself in a world where humans have discovered the existence of both Vampire and Lycan clans, and are conducting an all-out war to eradicate both immortal species.

Underworld: Awakening 3D is set to release in theaters January 20, 2012.