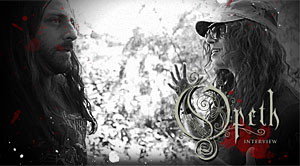 If you’re a metal fan, and especially if you’re an Opeth fan, you might have heard that they are getting ready to release their 10th studio album this September; you don’t need us to tell you that. What you don’t have, however, is Yell! Magazine’s interview with the Martin Mendez (bass guitar) at Heavy MTL.

So, in case you don’t already know, the new album will be titled Heritage and it will be Opeth’s first to feature straight vocals only; that’s right, no death growls from the prog metallers. The symbolic cover art on Heritage, featuring skulls of past members and roots going to hell (death), etc., was designed by Travis Smith.

After listening to the obviously jazz-inspired first track to be premiered, “The Devil’s Orchard,” you’ll have to agree with Mikael Åkerfeldt’s earlier statement that “I think you’ll need a slightly deeper understanding of our music as a whole to be able to appreciate this record.” However, if you’re a fan of Opeth and progressive metal, this one sounds promising.

Check out our interview to get Martin’s perspective on the difference between North American and European fans (hint, we’re a bit more awesome in North America), his thoughts on the strength of Heritage and the inspiration for its content. Also, Martin talks about the state of metal today.

Also, check out our interview with Trivium.

And Yell! about our shit in the comments section below.