The Walking Dead: How To Kill A Walker Video 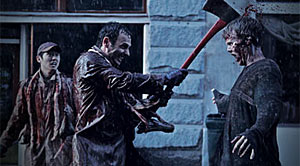 Ever wondered how to kill a walker? This compilation of scenes from season 1 of The Walking Dead will give you some food for thought. Viewer discretion is advised.

The second season is currently scheduled to premiere in October 2011 and will feature 13 episodes. At a 2011 Paley Center for Media panel, it was announced that the second season will feature Grimes’s group of survivors leaving Atlanta for the countryside, including the Greene family farm, a setting in the comic book series. – wiki

The Walking Dead: How to kill a walker video