Call Of Juarez: The Cartel – Or: How To Bollocks A Franchise In 5 Easy Steps And Fun With Profanity 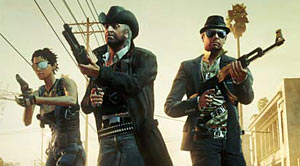 The Call Of Juarez series is a decent, if unspectacular, franchise that’s managed to carve out a nice niche for itself these past few years. For sheer graphical firepower, it was never going to compete with industry titans like Call Of Duty or Crysis. In that same vein, neither was it going to give COD’s multiplayer a run for its money. What 2006’s Call of Juarez and its 2009 sequel Bound In Blood did provide were relatively unique Western movie- and Civil War-era storylines, settings and weapons. A rare sight in an industry perennially focused on WW II, Vietnam, and more modern conflicts.

Unfortunately, the developers at Techland, creators of both previous games and the newest entry in the series, seem to be feeling their oats and have decided to take a stab at the big guys with their latest release by aligning the series with modern shooter conventions. Call of Juarez: The Cartel is a gigantic misstep in the wrong direction for the franchise, sacrificing everything that made the first games so special and substituting a mishmash of elements from bigger, more popular industry heavyweights.

Gone is the late 19th century setting, replaced by a current-day storyline that feels like the developers have spent way too much time rewatching old episodes of 24. Gone are the six-shooter-sporting cowboys and in are three law enforcement characters, each representing every single movie cop cliché you care to name. There are some mild attempts at pushing the whole “modern day Western” feel, but once you dump the cowboys, the Winchester rifles and the horses, what you’re left with is a shooter with very little to differentiate it from the gamut of other products crowding store shelves, clamoring for your attention.

Still, Call of Juarez: The Cartel does have some minor enjoyment deep down in its marrow. It’s entirely up to you how much sucking you plan on doing on its femur and how long The Cartel manages to monopolize your play time.

Call of Juarez: The Cartel is available now on Xbox 360 and PlayStation 3. PC owners will have to wait till September 13th to get their fix. For review purposes, the PS3 version was used.

Forget Arkansas, The Cartel takes place in modern-day Los Angeles and Mexico. Taking a cue from every single recent terrorism-based shooter out there, the story opens with the shocking bombing of the offices of the DEA by a criminal organization known as the Mendoza Cartel. Since nothing with the word “cartel” in its name inspires much confidence in the possibility of unicorns, rainbows, and hot, sweaty sex with Kate Beckinsale, (all the good things in life) you can probably imagine that the Mendoza goons aren’t choir boys. Heck, I’m pretty sure they’re not even Catholic.

This attack leads to the formation of your typical “under the radar,” “unofficial,” and “covert” assemblage of a handful of badass types who are tasked with taking down the drug dealers. It’s a “if you or your team members are caught, the agency will disavow any and all knowledge of you — and we’ll totally steal your stereo once the bad guys put two in the back of your head” deal. Luckily, three people step up to the plate and players can choose to inhabit any of their Isotoners, with very minor story deviations as the result of your pick. You can play as LAPD Detective Ben McCall, a descendant of the protagonist in a previous franchise entry, FBI Agent Kimberly Evans, or DEA Agent Eddie Guerra. Regardless of your choice, major plot movements remain the same throughout.

Somewhat counter to most shooters, you won’t get any feel-good vibes from spending too much time in any of their bodies. All three so-called heroes are as dirty as they come, embarking on their mission while either owing bookies tons of cash, hiding dark pasts or seeking revenge for some deep, dark secret they’re not willing to share with one another. It’s hard to root for your chosen character when he or she is just as bad as the drug dealers doing their best to make sure your agent doesn’t live long enough to collect a pension. And for law enforcement types, they break an astounding number of laws and send enough souls straight to hell to make ol’ Scratch’s cup runneth over.

It doesn’t help that all three characters are both scripted and voiced as larger than life stereotypes. McCall is the gruff, older guy, a Vietnam Vet with a chip on his shoulder and no patience for anybody or anything. Evans is every single Michelle Rodriguez performance rolled into one with her tough chick act. And Guerra might as well be wearing a red neon sign blinking “LATINO GUY HERE” every few seconds. In fact, every character in The Cartel feels like they were picked for the one quality or ethnic background they embody. And they each embody the living heck out of their ethnicity to the point of being barely masked racial stereotypes.

Meh. I guess I’ve seen Steven Seagal direct-to-video movies with worse plots and characters than The Cartel and I don’t expect much story-wise from middle-of-the-road shooters anyway. The story is entertaining enough in a cartoonish sort of way and it gets you from A to B speedily enough, though you should brace yourself for an onslaught of shouted “Vatos!” and “Cabron!” and enough exotic variations on the F-word to fill several dictionaries on your way there. Oh yes, characters in The Cartel use “fuck” like most people use commas. Well, how else are you supposed to know they’re badasses?

Read about the gameplay, presentation, and Call of Juarez: The Cartel verdict after the jump…