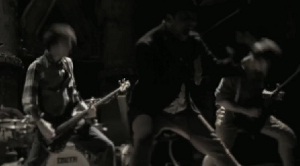 If you’re attending the Vans Warped Tour this year, you are no doubt looking forward to seeing August Burns Red. The metalcore band, formed in 2003, is currently supporting its latest release, Leveler. The latest video, for the song “Internal Cannon,” debuted recently and it’s pretty cinematic, although there’s a scene that kind of reminds us of Michael Jackson’s “Beat It.” At any rate, it’s a great track with some nice Spanish-inspired interludes that do nicely to break up the balls-out intensity of the song.

Leveler is currently at number one on Billboard’s Hard Rock Albums and number 2 on the Rock Albums charts. The boys in August Burns Red must surely be happy.

Joining August Burns Red on the Warped Tour are: Of Mice and Men, The Devil Wears Prada, Asking Alexandria, 3OH!3, Gym Class Heroes, Less Than Jake, Against Me!, Attack Attack!, Paramore, Pepper, A Day To Remember, Jack’s Mannequin, and D.R.U.G.S.