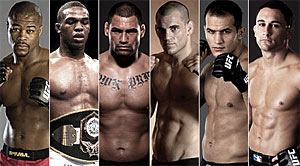 Being a fan of MMA since the days of watching Royce Gracie stick it to guys both stronger and bigger than himself through the first five UFC’s, I have watched the spectacle develop from a small market side show to the best sporting event on television.

What has always irked me is the over hype of many of the MMA stars by writers, commentators and fans over the years. Being a personality that prefers hard facts over emotional utterances, I find now is the best time to dispel some stupidities fostered over the last couple of decades. The main reason is that the sport has reached its defining stages. Every combatant out there now has a pedigree of expertise in every major form of fighting that has been proven successful in the cage and we now see (and have seen for quite awhile) that the better athlete with the best game plan is the one that dominates the sport. In other words there are few differences between one fighter and another other than talent, hard work, and planning and therefore comparisons should start to made.

But it seems that many of the writers, announcers and fans still don’t understand the difference between what is great and what is the greatest. Even the UFC Hall of Fame, like other sports, fails to show this difference.

I write this article knowing that once it is done I will be in the minority opinion, but that has never been a deterrent in this writer’s push to say what needs to be said, and that is, there is a major difference between the great and the greatest. The two should never be confused and they should never be interchanged.

Before I decide to write what many will consider some sacrilegious utterances, it’s time to define the difference that is the gulf between what is great and what is the greatest. When speaking of these two terms, as it pertains to MMA, and sport in general, the most important thing to mention is the failed attempts to compare athletes from different eras. In the end it never works.

If you tell me that Matt Hughes is greater than Royce Gracie, and you cite the fight at UFC 60 as your proof, then you fail to comprehend the importance of the term era. All that the fight in Los Angeles did was show that cage fighting had moved on the from single discipline contests it displayed in its early days to the Mixed Martial Arts contests we see today.

The fact is, the only way to rightly distinguish between great and greatest is to look on each fighter and see what he did against the competition he faced during his career. The great fighters were successful but the greatest fighters were dominating, and that is the clear difference. To interchange the two, as if they are both the same animal, which it seems most do on a consistent basis, is both stupid and insults the legacy of the greatest fighters in the history of the sport.

More on BJ Penn and Randy Couture on the next jump…