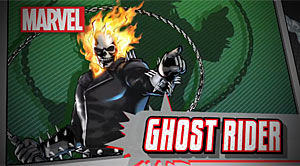 You can never keep anything a secret these days. During Comic Con this past week, Capcom announced Ultimate Marvel vs. Capcom 3. 12 extra characters, 8 new stages, a redesigned HUD, rebalancing, and more online features. Capcom planned to slowly reveal the new fighters right up to the launch of the game. That sounds great in theory. Unfortunately, much to the chagrin of Capcom PR, the names of the new characters got leaked. Here are the new roster additions, but you didn’t hear it from me.

The new Capcom compatriots are: A returning character, and a staple to the vs. series. I’ve played Strider in more fighting games than in actually “Strider” games. The brother of the main guy from Devil May Cry. But I really wanted to play as Greg, Dante’s second cousin twice removed. I love Phoenix Wright! He looks great in a suit, and can stab people with his hair. Find out who the new Marvel heroes are on the next jump…
httpvh://www.youtube.com/watch?v=uaNkd4XcDpQ