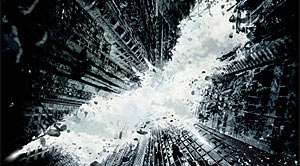 The eagerly anticipated The Dark Knight Rises gets its first trailer! It’s mostly recycled footage from the previous two entries in Christopher Nolan’s revamped Bat franchise, but watch out for some early glimpses of Bat-Villain Bane, played by Inception‘s Tom Hardy and also the infamous man who broke Batman’s back. No shots of Anne Hathaway’s Catwoman just yet, guess they must be keeping her costume under wraps for the time being.