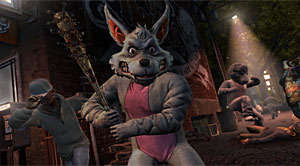 I’m a serious video game enthusiast. I enjoy provocative characters, tales of heroism, and immersive worlds. But sometimes I wanna run around town naked beating up random strangers with a giant purple marital aid. If that is what’s missing in you’re life, then Saints Row: The Third is for you.

I’m amazed at how far we’ve come to get to this point. Initially, the Saints Row series was conceived out of the Grand Theft Auto open world gameplay concept. It wasn’t the first game to imitate this style of gameplay, but it was the first to capitalize on one key aspect of the genre. They not only gave the player a consequence free environment, but more importantly, they encouraged crazy, over the top, psychotic behavior. With each iteration, they added more and more ways to cause mayhem and destruction in hilarious fashions. GTA has always been about social commentary, and making fun of the real world. It’s like the video game version of Jon Stewart. But Saints Row is a parody of that parody.

In Saints Row: The Third, you don’t have to go through a tedious rags to riches story. This time around, the Third Street Saints are large and in charge. They’re taking over the world as an established brand. This fame comes with fun perks, like tactical air strikes, and tanks. A little more than your standard red carpet gift bag. Despite the notoriety, infamy has its price. You’re still trying to take down rival gangs, but now in the new city of Steelport.

I love the unapologetic nature of Saints Row. THQ / Volition knows that millions of people who buy games like GTA, bypass anything story related, and run down pedestrians and cause havoc for hours. With the right amount of shameless violence and tongue cheek humor, this could be a fun mindless ride. Saints Row: The Third comes out on November 15, 2011.