Monster Brawl: It’s The Fight Of The Living Dead 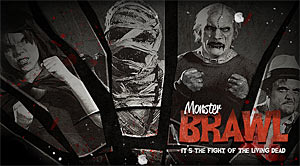 A new unrated teaser trailer for the upcoming film Monster Brawl has been released. Eight legendary monsters (Cyclops, Mummy, Lady Vampire, Zombie Man, Witch Bitch, Swamp Gut, Werewolf, and Frankenstein) have been pitted against each other in a fight to the death to determine most powerful monster of all time, complete with what looks to be hilarious referee action.

The cast boasts Dave Foley of cult classic Kids In The Hall fame, along with pro-wrestling staples Jimmy Hart (“The Mouth of the South”) and Kevin Nash (“The Punisher”), and MMA referree Herb Dean.

It sounds like whether you’re a fan of classic movie monsters, pro-wrestling, MMA, or just plain good old fashioned violence, there’s a little something for you in this upcoming flick.