Hitman Absolution: Into The Mind Of A Killer 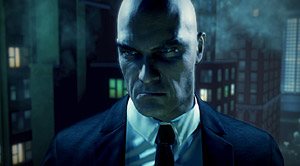 Its been five years since the last Hitman, and yes that dreadful movie doesn’t count. Thankfully, the bald psychotic agent is back, and he has a few new tricks up his tailored sleeve. I’ve always had a soft spot for the guy in the blood red tie. For a hired killer, the people he usually ends up killing deserve it. It’s always the head of a drug cartel, or mob boss, or some corrupt politician. You start to wonder if he’s just doing the dirty work of other video game characters.

It does look like he’s taking a page or two from his contemporaries. Agent 47 now has a sixth sense, much like detective vision in Batman: Arkham Asylum. He can now see enemy movement patterns, weapon locations, and know where all the exits in a room are like Jason Bourne does. This mode is suppose to give the illusion of seeing the world through his eyes. We see what he sees and how his mind works. This should ease the trial and error aspect of the stealth gameplay.

But if sneaking in the shadows has never been your cup of tea, you can always go in guns blazing. In the past, doing that doesn’t normally end well for our friendly neighbourhood assassin. However this time around, you can in theory take out an entire room of guys, it won’t be easy, but it should be doable, and more satisfying than in past games in the series. Hitman is due for an overhaul. Hopefully, nothing of what makes Hitman, Hitman, gets lost when it’s released later next year.