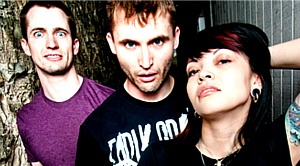 Back in March, we here at Yell! Magazine sang the praises of KEN mode, a doomy sludge-fest of a band from Winnipeg, Manitoba. We stated that at every turn their new album, Venerable, left “you feeling like you’re getting the shit kicked out of you MMA style. We still believe that to be true.

We also reported that KEN mode would be on tour until May. Well, if you didn’t catch them, you’re still not shit out of luck as they are continuing the road assault (see dates below). This time around they’re packing vans with the San Francisco outfit Deafheaven, which is surely going to set the scene on fire.

If that weren’t enough to tucker out the KEN mode trio, they’ve also announced that they’ll be leaving the June tour early to head over to Europe to play one of the most highly respected metal festivals in France, Hellfest. They’ll play on Sunday, June 19th, along with Ozzy, Judas Priest, Cavalera Conspiracy, Firewind, Opeth, Therion, Cradle of Filth, and The Black Dahlia Murder. The other two days of Hellfest (June 17th and 18th) features such acts as Iggy and the Stooges, Rob Zombie, Down, The Cult, Alter Bridge, Architects, In Flames, The Melvins, Clutch, The Damned Things, Scorpions, Black Label Society, Apocalyptica, Thin Lizzy, and much, much more.

Hey, at least the French know how to do something right.