Dungeons & Dragons: Daggerdale Review Or: How I Stopped Worrying And Learned To Love Fortitude Saves 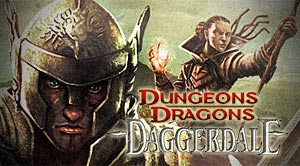 Or: Sound and fury signifying lots and lots of clicking.

In terms of production values, Dungeons And Dragons: Daggerdale is certainly on par with your average budget title. You can obtain the game for a mere 1200 Xbox points or somewhere around 15$ for your PC. For such a low price, you can’t expect sky-high visual quality. Daggerdale’s very first quest involves you rescuing a trio of Dwarven miners. The game doesn’t state that these dwarves were all separated at birth but they certainly look the part. Despite different last names, they all share the same character model.

Ever since the days of the original Diablo, dungeon crawlers have sought to inflict terminal carpal tunnel syndrome on as many gamers as possible. Daggerdale is no exception. As is typical for the genre, you’ll have to smash an insane amount of barrels to gather up equipment and funds. Normally, I’d accept this as one of the genre’s conventions and grit my teeth as I smash my way through my thousandth barrel. However, Daggerdale’s hit detection system is in dire need of some glasses. Not only will your swings miss a targeted canister more often than not, picking up the loot that falls from a destroyed container is also problematic. You’ll often have to walk around back and forth over a pile of gold several times before the game decides that you’ve hit the correct sweet spot for a pick-up.

By this same logic, you can probably figure out that combat is an equally uncertain affair. Spell casting classes like the Wizard and Cleric have it a bit easier. Fighting at range seems to produce better hit detection than fighting in melee. There’s a minor attempt at a lock-on system but like everything else in the game, corners were cut.

And speaking of corners, prepare yourself to endure a lot of texture clipping. Swords and your character’s arms and legs will vanish into walls, spells will float through textures, bypassing entire walls. And the camera? While it’s pretty steady as far as these things go, you’ll sometimes get a preview of the upper floors of a zone if you swing your point of view high enough, sending the camera careening right through the ceiling.  Pretty sure it’s not supposed to do that. Also, when you trigger and in-engine cutscene by finishing a quest, Daggerdale’s creators made the odd design choice of teleporting your character in front of the quest giver. This is particularly annoying since it forces you to often backtrack a considerable distance to pick up any loot you may have left behind.

On the bright side, even though some of the more entertaining D&D classes aren’t represented in Daggerdale, what is there does provide some minor incentive to play the game at least a second time. There’s enough of a difference in playstyle between a fighter and a wizard to encourage you to suffer the game’s faults just to check out the higher level spells. Of course, higher level is a relative term in Daggerdale. The D&D system as always been a bit limited in how high a character can level up and Daggerdale uses the newer 4th edition Dungeons and Dragons rules, thus limiting your character progression to level 10. Not only is this low by D&D standards but it’s pretty damn low in comparison to most any other game on the market.

Further limiting your options is Daggerdale’s odd choice to limit classes to 1 pre-fab race. Want to play a Dwarf fighter instead of a Human? Tough. Ya can’t. Combat abilities suffer greatly from the decision to reduce the amount of levels you can obtain. You simply don’t have access to some of the more spectacular spells or combat moves available in the 4th edition rules. If you like some pyrotechnics in your battles, I suggest sticking with the spell casters since fighter and rogue combat becomes visually monotonous quite fast.

Enemy variety is decent but uninspired. All of the expected fantasy staples, read: clichés, are included. If you like goblins, you’ll be well served by Daggerdale. Occasionally, the game will present you with a decently designed monster but none of Daggerdale’s rogues gallery end up leaving much of an impression.

Except for this guy. He left quite an impression on my face.

Daggerdale’s sole redeeming gameplay point is the multiplayer. You and several friends can slog through the game’s main questline, bringing a bit of fun to an otherwise dreary affair. But Daggerdale never gets hard enough to warrant the inclusion of a full party. So unless you and your friends are planning on critiquing the game MST3K style, which would admittedly bring some minor joy to the proceedings, the multiplayer is a nice distraction but an ultimately empty one.

As previously mentioned, Dungeons And Dragons: Daggerdale is a budget title. Therefore, the game’s set decorator didn’t have much to work it. Props like benches and doors repeat to infinity and beyond. If you’ve seen one broken table you’ve seen them all. And for a loot-based game, the visual variety when it comes to weapons and spells is extremely poor. You’ll never be excited to find that +10 Bastard Sword Of Rapid Neutering since it looks just like any other sword, thus defeating the purpose of having every single barrel in the game spill forth tons of loot.

The label on that shield reads “Yet another motherlovin’ shield.”

Audio quality is on par with the graphics. Sword strikes sound a lot like the sound designer swinging a Nerf bat at a punching bag in his basement. Sure, it gets the point across but you don’t exactly get a visceral thrill out of hearing it go “Thump!”. Voice acting, what little there is of it, gets the job done. The main villain in the game at least sounds like he could do some damage if you tried kicking him in the shins. However, the various grunts and mumbles from NPCs will fray your nerves rather quickly.

Dungeons and Dragons: Daggerdale is a B-movie with a C-list cast and D-list special effects. Sure, there’s some fun to be had if you’re not too demanding and the multiplayer might keep you entertained for a few hours. But if you’re in the mood for a good dungeon crawl, I recommend waiting for the upcoming Dungeon Siege III. Or if you’re a loot-aholic just looking for a quick fix, go pick up the much superior Borderlands.

Now if you’ll excuse me, there’s this hot Half-Elf Bard at the bar I’ve had my eye on all evening…

A catastrophic Charisma save fail? Oh , come on!

Sigh. Looks like it’s another evening playing with my wand…