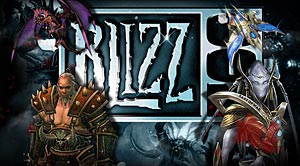 Blizzard Entertainment today announced that tickets for its sixth BlizzCon gaming convention will go on sale in two batches on Saturday, May 21 and Wednesday, May 25. In addition, a limited number of tickets to an exclusive pre-BlizzCon dinner to benefit Children’s Hospital of Orange County will go on sale Saturday, May 28.

BlizzCon is a celebration of the global communities surrounding Blizzard’s Warcraft, Diablo, and StarCraft game universes. The event once again offers players a valid reason to skip work on a Friday when it returns to the Anaheim Convention Center this year on October 21 and 22. Gamers around the world will also have the option to enjoy BlizzCon from the comfort of their own home by ordering a BlizzCon Virtual Ticket, which offers comprehensive live coverage of the event streaming online and also on DIRECTV in the United States.

“We love being able to meet directly with our players, and since BlizzCon is one of the rare opportunities we get to do that, we always pack as much information and entertainment as we can into the show,” said Mike Morhaime, CEO and cofounder of Blizzard Entertainment. “This year will be no different — whether you’re with us in Anaheim or joining from home, be prepared for two days of Blizzard gaming and good times with the most passionate community in the world.”

In addition to serving as a mutual stomping ground for the different Blizzard communities, BlizzCon will feature an array of activities, including discussion panels, hands-on playtime with current and upcoming Blizzard Entertainment games, professional and casual tournaments, contests, and much more. Blizzard is looking forward to learning more about its own games from Red Shirt Guy if he can make it to the show again this year.

Tickets to the convention will be priced at $175 USD each and will be available for purchase from the official BlizzCon website (www.blizzcon.com) in two separate batches on Saturday, May 21 at 10 a.m. Pacific time and Wednesday, May 25 at 7 p.m. Pacific time.

Tickets to the BlizzCon Benefit Dinner, which include admission to BlizzCon, will be priced at $500 USD each, with proceeds going to Children’s Hospital of Orange County. Taking place the evening of Thursday, October 20, this exclusive event offers guests an opportunity to rub elbows and trade war stories with Blizzard game developers and other employees before the show. Approximately 200 tickets to the benefit dinner will be available for purchase beginning Saturday, May 28 at 10 a.m. Pacific time through www.blizzcon.com.

Gamers around the world will also have the option to purchase a BlizzCon Virtual Ticket priced at $39.99 USD (pricing may vary by region). The Virtual Ticket grants access to comprehensive live HD coverage from the show floor on each day of the convention, including exclusive interviews, demos, and more. Virtual Ticket coverage will be available to viewers globally as a multichannel Internet stream and also via Pay-per-View on DIRECTV in the United States. DIRECTV customers who order the televised event will receive the multichannel Internet stream at no extra charge, allowing them to watch in the format of their choice. Those who order the BlizzCon Virtual Ticket will also receive this year’s BlizzCon-exclusive World of Warcraft and StarCraft II in-game items (availability may vary by region), to be revealed at a later date. Limited streaming coverage of the BlizzCon opening ceremony and certain BlizzCon tournaments will be available via the Internet for free.