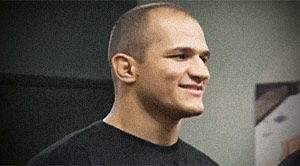 Last week was the premiere of The Ultimate Fighter: Team Lesnar vs. Team Dos Santos on Spike TV. It definitely wasn’t the most exciting episode ever made in the history of TUF, I’d like to add. OK, both coaches have mutual respect to each other, and not much was said between the two. Perhaps Dos Santos can’t speak much English, but c’mon it’s The Ultimate Fighter. It’s a show to keep us entertained, so entertain us a little, and I’m not saying to do it in a Koscheck way either.

Beyond this minor complaint of mine, I mainly watch the show for the great free fights, and to see any up-and-coming UFC stars.

The first fight that aired was Shamar Bailey (Santos’ first pick) vs. Nordin Asrih (Lesnar’s last pick). Shamar Bailey clearly dominated the two-round fight (mainly controlling his opponent on the ground) and won to a decision. Although the fight itself wasn’t exciting to watch, I’m still really looking forward of seeing more of Shamar Bailey on TUF 13. Brock Lesnar’s best remark was after the fight in which he pointed out that wrestling is very important.

The next episode will air tonight, so in the meantime check out this exclusive clip of the fighters regrouping with their coaches.