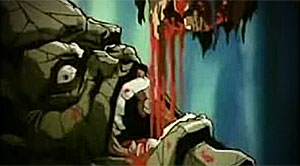 [rating:5]
When a movie that is first, filmed in black and white; second, foreign (and therefore subtitled); third, made 50 years ago; and forth, over three hours long, it must be great if it is still around. This movie is exactly that. The inspiration for movies like The Magnificent Seven (1960) this movie can be considered the best movie to come out of Japan. It tells of a village in the 16th century which will be attacked by bandits as soon as the farmers of the village harvest their crops. The village sends out 4 men to recruit samurai to defend their homes. The men come back with seven samurai and the battle commences to cinematic glory.

[rating:4.5]
If you are interested in the older martial arts film coming out of China, you are in for a treat with this Chia-Liang Liu directed masterpiece. Chia-Liang Liu is still directing today, his latest at the writing of this review is Qi jian [Seven Swords] (2005), but Shaolin Master Killer or 36th Chamber of Shaolin as it is also called is his best film (at least that is available in North America). The film stars Chia Hui Liu (San Te) as a Confucian philosophy student, who witnesses the murders of his classmates and teacher by invading Qing (Manchu) forces. San Te escapes to the Shaolin Temple to learn the martial arts in order exact revenge on the murderers. The film shows it’s greatness during San Te’s five year training period (others may take longer or never finish). He is tested in each of the 36 chambers and through the trials he becomes a master in the art of kung fu. Taking his skills and knowledge back to his village, he conquers his enemies and frees the town.

[rating:4.5]
One of the best films in Japanese anime, Ninja Scroll is directed by Yoshiaki Kawajiriby who also wrote the script. The film is both stunning in its animation and shocking in its depiction of blood, gore, violence and sexual exploitation. The story surrounds a masterless ninja for hire (named Jubei) who is drawn into a conflict between the ruling clan of Japan and its rivals who are bent on overthrowing them. Up against an unknown assailant, who has the alliance of eight demons possessing supernatural abilities, Jubei, with the help of a beautiful female ninja and a government agent, must fight against all odds to save Japan. If you love Japanese anime, then Ninja Scroll is a must see.