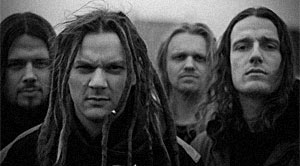 Vocalist Anders Fridén from In Flames announced a week ago a new video for a single called “Surviving Self Resentment” for a band he is currently managing called Insense. They’re a Norwegian metal band influenced by the likes of Sepultura, Metallica, Machine Head, Napalm Death, and Obituary to name a few.

Insense will release their fourth studio album Burn In Beautiful Fire on April 8, 2011. Anders is fully stoked about the band and wants to unleash them to the world. He has nothing but great words to say about Insense, check out some of his quotes below:

Words From Anders Himself:

“First time I heard them, I wanted more.”

“They have this amazing ability to sound extreme yet poised, dark yet beautiful, hardcore yet soft, technical yet simplistic, all without falling into the ‘pathetic’-trap. They are an extreme metal band that’s comfortable to listen to. They’re difficult to categorize that way.”

Insense is definitely a mesh of death metal, grindcore and hardcore from the sounds of this single. Lead singer Tommy Hjelm said, “this is the best album we’ve ever made” because they managed to focus on all their influences into one. With that said, Insense will be doing a major leap with Burn In Beautiful Fire, and we can’t wait to hear the whole album.

What’s your opinion about this song? Is it amazing, mediocre or poor shit? Let us know what you think in the comment section below.