The End Of Fedor Emelianenko? 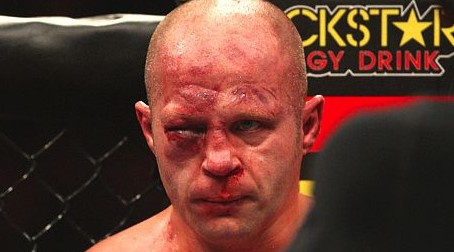 The STRIKEFORCE: Heavyweight Grand Prix Tournament kicked off with a bang last night, seeing Fedor Emelianenko suffering a second straight loss. This loss came at the hands of Antonio “Big Foot” Silva by TKO due to doctor stoppage at the end of the second round. Not long after the fight, Fedor questioned retirement from MMA , saying it is probably time for him to move on from the sport.

Whether Fedor is serious about retirement or not is still up in the air, but one thing is for sure, he is a bonafide hall of famer in MMA, having accomplished so much by defeating some of the toughest guys MMA has produced. MMA has evolved tremendously since Fedor’s days, but he will always be considered one of the best to ever step into MMA. Check out Fedor’s loss to Silva above.