Killzone 3 Will Be EPIC! Watch The Making Of 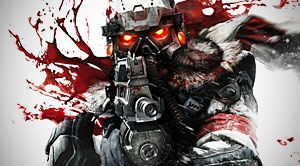 Spanning more than 70 minutes of cutscene footage, the Killzone 3 single player campaign boasts a breathtaking storyline brought to life by some of Hollywood’s finest talents. In this sneak peek at the Killzone 3: Behind The Scenes featurette, which is part of the Killzone 3 Helghast Edition extras, Guerrilla reveals how real-life actors were transformed into virtual characters.

Using state-of-the-art motion capture techniques, the actors’ performances were captured using reflective tracking markers worn on the face and body. Many of the props and characters they were acting off of only existed inside the computer, however.

Actor Ray Winstone (Admiral Orlock), who cut his teeth on full-body performance capture in the 2007 movie adaptation of Beowulf, was undaunted by that prospect. ”It’s like going back to school in a way,” he said. “You play the scene, and you start to get your imagination back, you know?”

Costar Malcolm McDowell (Chairman Stahl), whose video game appearances stretch back to the early ’90s, was quite satisfied with the technology. “When I’m 85, I can be doing video games, because they can put a young man’s face over mine,” he joked. “And as long as I don’t do a gravelly voice, I’ll be alright!”

The full Behind The Scenes featurette is an exclusive part of the Killzone 3 Helghast Edition extras.

The Making of Killzone 3 Video / Trailer