Short Skirts, Machine Guns, B-52 Bombers, And Fire-Breathing Dragons… Sucker Punch Brings It All Together 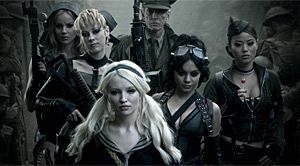 A few months ago, we saw a stunning new vision in Sucker Punch (2011) with a kick-ass track from 1994 called “The Crablouse” by the Lords of Acid that came along with the trailer. We can’t blame ourselves for liking the track at all since it did bring the trailer together. Zack Snyder has been impressing everyone around the world with his unique vision for years, which is apparent in the box office numbers of his previous films, and it’s clear that he aims to continue spreading his creativity.

Snyder has described his latest action/fantasy flick Sucker Punch as “Alice in Wonderland with machine guns” and it includes fire-breathing dragons, short skirts, B-52 Bombers, and everything else your mind can dream of.

Emily Browning (Baby-Doll) stars with four other sexy young women (outspoken Rocket, street-smart Blondie, fiercely loyal Amber, and reluctant Sweet Pea) to help her fight off her dark reality in her own dream world. Eventually, her epic adventure is blurred by what is reality and what is imaginary.

Check out what the cast and crew has to say in this HD featurette. Sucker Punch hits IMAX theaters in March 2011.